The 100 card Topps Chrome Heritage set has a number of parallels each year.  This year the black parallel which has always been one of the best looking parallels of the sets was replaced with a blue parallel.

The one color that didn't change was gold

Because of the scarcity of these (numbered to only 5) I have only been able to secure 2 in my years of Collecting Cutch.

The 2015 version is my favorite simply because I love the 1966 design. 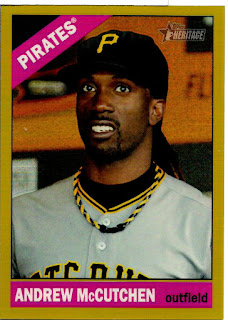 The 2017 version.....well....it's a card I can cross off the checklist.  Before getting this card in hand, I thought that the photo used for Cutch made him look like Bucky from Fat Albert.  I hate this card.  Strangely that is why I am trying to knock out as many parallels as quickly as possible so that I can never have to search for this card again. 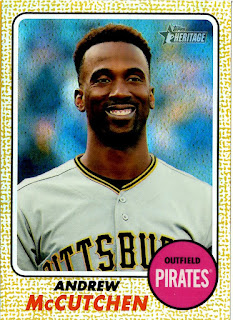 The backs of the cards speak for themselves though.
Low numbered goodness. 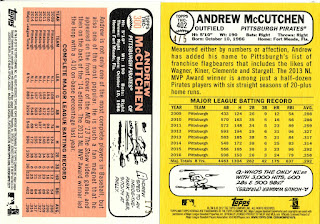 By adding the 2017 Heritage Gold to the PC, I only need 2 more to complete the rainbow, the 1/1 Superfractor Chrome and the Grey Back not numbered (only 10 exist though).

In a future post I will show off some other Heritage parallels I have.
Posted by Collecting Cutch at 12:35 PM