About ten days ago I placed an order for 93 cards to be delivered by COMC.  Many of them had been sitting in my cart for months.  Of the 93 cards, only 9 were NOT Andrew McCutchen cards.  7 are for my brother.  The other two were purple refractors of Nolan Arenado.

So what's that mean for my Cutch collection?  Well, quite simply...

This brings my new total of unique Cutch cards to 1,577.

When I started collecting Cutch, I didn't think I would ever get to a total close to that.

This latest batch gets me closer to several rainbows.

Let's take a look at the batch by year.

2016
The biggest joy from this group is the number of Bowman Chrome cards added to get closer to the rainbow.  A few Triple Threads parallels, some inserts, and a pair of Bowman Platinum that are relatively easy to acquire.  The Tops Tek Peak variant is only 1 per case.  I didn't scan the Tribute base card.  I've shown that in the past when showing off other low numbered parallels of the same cards. 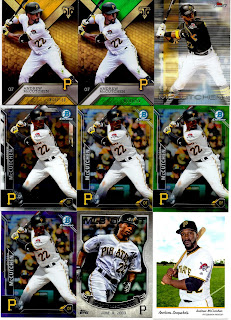 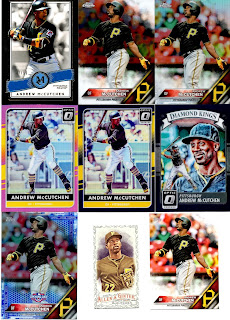 2015
There were a number of parallels that I need from the various number of Cutch flagship cards (League Leaders, All-Star Game, and Series 2).  The base looking cards are actually the Limited Glossy parallels.  A pair of Triple Threads color parallels to go with the base gave me a nice trio of new additions.  The Purple Ice is numbered to only 50 and is a beautiful card in hand.  A pair of Bowman's Best (gold /50 and green /99) to go with the Superfractor i already had in my possession helps get closer to completing the rainbow.  I have been seeking out as many 2015 Allen & Ginter buybacks as possible. I was excited to add this 2010 AG to the PC.  I also grabbed another Heritage for the team set. 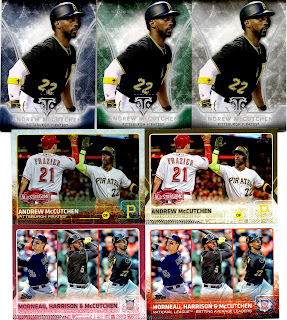 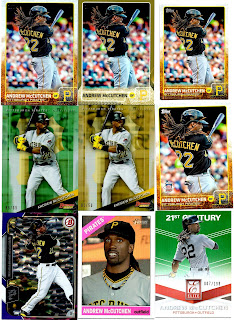 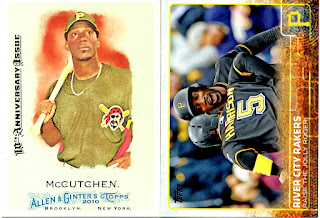 2014
These pickups were all about adding 5 new Donruss cards to the PC.  The Diamond Kings was a base.  The others are statistical cards along with a Gold Press Proof/99.  The Topps Chrome Topps Shelf is a card I must have lost in auctions with Free shipping nearly a dozen times. Very happy to finally add this to the collection for only a bit over $1.  The Diamond Dominance is the Prizm parallel. 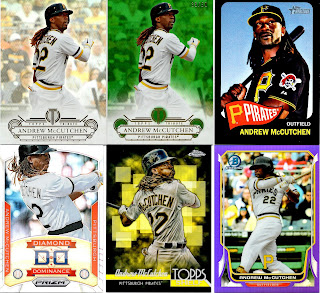 2013
A bunch of color parallels spotlight these 5 cards.  The Orange Finest is /99.  Oddly enough the card that finally brought me to submit my order was the Bowman Platinum Ruby (not sequentiality numbered).  I don't know if these are short printed, but this lil bugger always sells for over $7.  It's a gorgeous Atomicy looking card.  I grabbed this Ruby for only $2. 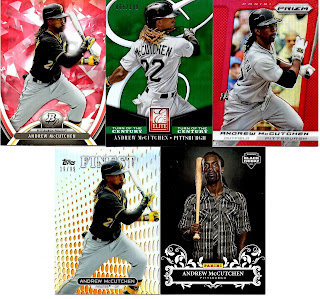 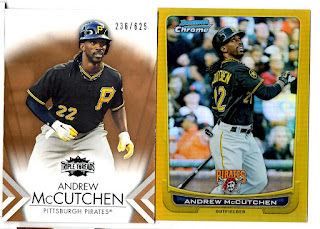 So there you have it.  What do you all think?  Did I do well?
Posted by Collecting Cutch at 4:32 PM