2017 Topps has been out for awhile.  While I have been aggressively adding some key cards from years gone by to my collection I have completely neglected trying to add Cutch 2017 relics to the PC.  I often find the flagship relics to sell really high upon a product's initial release then fall to the $5 or less mark after about a year.  That's normally when I seek out the lesser desired relics of Cutch.

Every now and then though a card will hit the market that you look at and say "I need that because chances are I won't see it again."

Such was the case when this 2017 Major League Material Relic hit eBay. 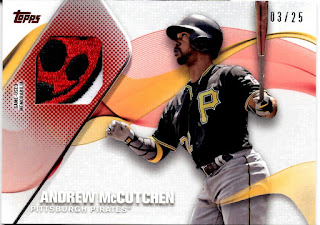 The card is numbered 3/25 and features a really nice swatch of the Jolly Roger sleeve patch. 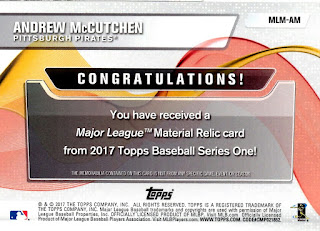 I've got some other 2017 relics coming in soon from Heritage, but for now this is my first of (hopefully) many more Cutch Pirates relics produced in 2017.
Posted by Collecting Cutch at 1:32 PM