April 26: This Day in Cutchstory

A year ago today, Cutch blasted three HomeRuns to help the Pirates beat the Rockies 9-4. 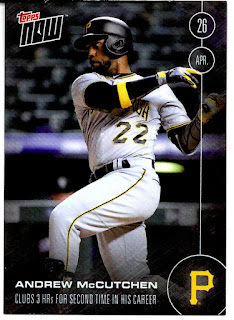 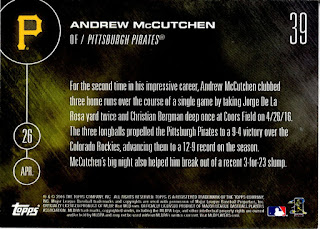 And here are some other cards that mention Cutch joining Hall of Fame Pirates Alumni Roberto Clemente, Willie Stargell, and Ralph Kiner as the only Pirates to ever accomplish the feat. 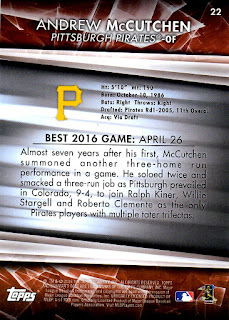 To say Cutch isn't one of the greatest Pirates ever would be a huge injustice to the career of Cutch.  He made baseball relevant again in Pittsburgh.  Sure players like Neil Walker, Pedro Alvarez, AJ Burnett, Francisco Liriano, and Russell Martin all helped, but it was Cutch who was a top 10 player in the league for a 4+ year stretch that made them become a playoff team.

Let's hope he can get his form back and lead this team to a playoff push.  The team has been in almost every game this year, only getting beat badly once.

The starting pitching has been strong and the bullpen despite giving me minor heart attacks has done it's job. The offense needs to take a step forward to remain relevant though.  The Pirates were 5 games under .500 on this date in 2014.  They went on to be a playoff team.  It has happened before.  It can happen again.
Posted by Collecting Cutch at 7:27 AM