Can you believe this guy?

I always had a soft spot for the Houston Astros because growing up I was always around my uncle who happened to be really good friends with Ken Caminiti.

One player who is finally getting some national coverage is George Springer.  He has had 4 leadoff homeruns in the first week of the season.

Fortunately for my fantasy baseball team, he has been a stud and I currently have 1st place on lockdown (still very early in the season).

George Springer was drafted 11th overall in the 2011 draft.  In 2012 Bowman created dual autos recognizing the most recent draft with top stars of that time period who were drafted in the same spot. 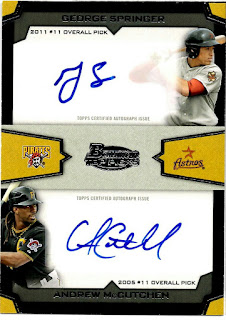 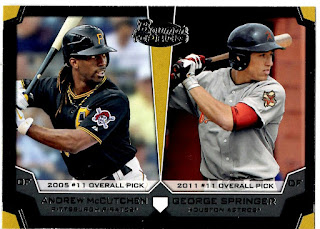 A few years back when Sports Illustrated predicted the Astros winning the World Series, they predicted a monster season for George Springer.  So far that prediction looks like it could have some merit. 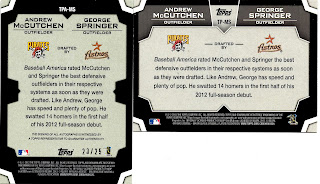 What I don't like is that Topps got lazy and used the same writeups on the back of the Autograph version and the insert card.

What do you guys think about Springer's hot start to the season?  Can he keep it up?  A few years back he almost finished a shorter minor league season with 40/40 stats.

Posted by Collecting Cutch at 6:23 PM