I am getting tired of people saying trade Cutch and bring up the Meadows kid.
Austin Meadows as hopeful as we can be of him is no more than a Nate McLouth clone.
Andrew's hardware and pedigree should speak for itself, but if you need some facts....here we go....

In 2012 he didn't hit his 1st HR until May 8th.  He would go on to hit 31 that season and finish second place for the batting title.

In 2014, the Pirates had the 3rd worse record in baseball at this time.  They would go on to have the 3rd BEST records in the National League.

The not so distant past shows that the Pirates and Cutch will be ok this year.

I am not panicking!

I bring up the term panic because as card companies often fail to guarantee their items from being any particular game, season, or event Hits Memorabilia has an online vault you can see the materials used to create the cards. This reduces the panic.

I have been adding a few of the Hits Memorabilia cards recently because even though they are unlicensed they have some beautiful looking cards that often times sell for significantly less than Topps or Panini releases. 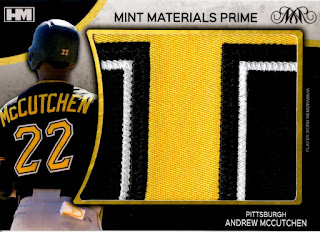 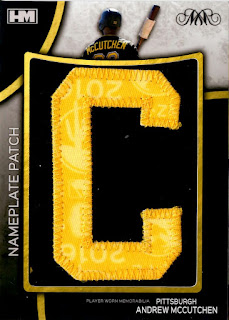 As I mentioned in a previous post these card's jersey were used in a 2016 Spring Training game vs the Rays when Cutch hit his 1st HR of the year.


Posted by Collecting Cutch at 4:50 PM