Over the years, Topps has used Heritage to bring the current stars of the game on designs from the past.

Cutch has appeared using the same numbering as Pirates Legend Roberto Clemente a handful of times.

I want to preface these segments and state that I do not believe that a single season of Cutch can take away from the greatness of Roberto Clemente's life or his baseball career.

Each of these Heritage comparisons will take a look at a card of Cutch and compare it to the design's original numbered card. 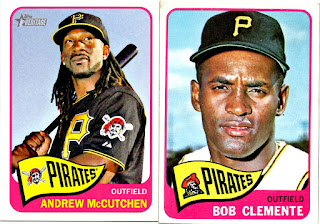 Cutch's 2014 Heritage card is numbered 160 the same as Pirates Legend and Hall of Famer, Roberto Clemente.

To pay homage to the original Clemente Topps even made a super short print error variant to recognize the misspelling of Pittsburgh (Pittsburfh) on the back. 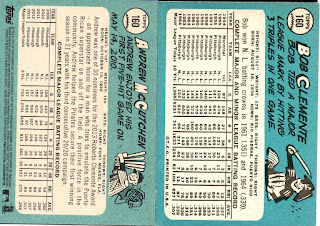 As will be customary for these Heritage Comparisons I will take a look at the standard counting stats typically found on the back of a baseball card for the players previous year.

Runs Scored and Runs Batted In
Runs scored and RBI are based on who hits in front of you and who hits behind you.
Clemente scored 95 runs and drove in 87 in 1964.
Cutch scored 97 runs and knocked in 84.
It was almost a draw (182 v 181), but a
very slight Advantage goes to Clemente


I hope you enjoyed the comparisons made based on the Heritage and original design numbering.  I will continue to do these segments if there is enough interest in them.

Now I will show off the parallels I have for all my 2014 Heritage cards.

First up are the black retail exclusive border with the black chrome /65 border below it.

The only variations I need are Superfractor 1/1, Gold Chrome /5, Refractor Chrome /565, and Topps Vault Blank Back 1/1,

Please let meknow what you think of these segments.  Are they are a cool and fun idea to look at cardboard?
Posted by Collecting Cutch at 8:50 AM