Being a New Jersey native, I have had the pleasure of seeing future Hall of Famer play a few times.  I recently saw that Bald Vinny, key contributor to the Bleacher Creatures in New York is getting an autograph card when Archives hits.  I don't like that at all.  I bring this up because everytime I hear Derek Jeter's name I think of those chants at Yankee stadium.

The Pirates have a home series against the New York Yankees this weekend that I hope they can win.

I don't have any dual autos or relics of Cutch with current Yankees players (besides a Jacoby Ellsbury in a Red Sox uni quad relic with Cutch, Jones, and Trout) so I am forced to show off a card I recently snagged off eBay. 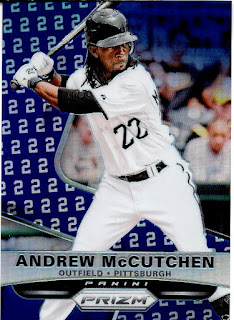 It's the Derek Jeter 2015 Prizm parallel.  These are insanely hard to come across.  As a matter of fact, only the Jordan Zimmerman, Cole Hammels, and Dee Gordon ones are for sale on eBay and COMC as I type this. 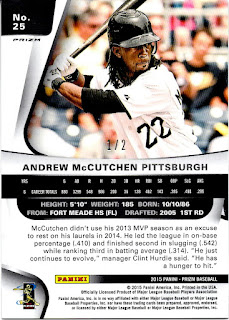 Mine is numbered 1/2 and I know who has 2/2.  I won't ever be able to get that away from him though as he also has the Black Infinite 1/1 to complete the rainbow.

Posted by Collecting Cutch at 11:51 AM