Today is one of my favorite days of the year.

The Pirates season won't begin until tomorrow when they face one of the League's bests teams, the Boston Red Sox.  Many early predictions for the 2017 season have the Red Sox as the American League Pennant Winners.  It won't be easy for the Pirates to start their season as they'll be facing last year's AL Cy Young Winner Rick Porcello and newly acquired Chris Sale to start the season.

To celebrate the start of the 2017 Season, I wanted to show off my Photo Variant from 2017 Opening Day.  MLB is doing a major marketing push for the #capson on Social Media today.
Cutch must not have gotten the memo. 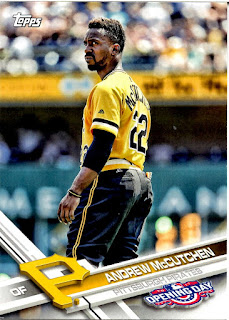 I am looking for the base and foil of the 2017 Opening Day series.  If you have them, hit me up for a trade.
Posted by Collecting Cutch at 7:27 AM