A few days ago I showed off all my Cutch cards featuring my Astros related cards in celebration of their first World Series Championship, I am looking at some interesting statistics and how Cutch ranks in regards to some of the All-Time Astros.

Strange to look at, I know, bit I can spend hours on Baseball-Reference and never get bored.

When I first think of the Astros there are three generations of Astros I remember.

The first is the mid 1980s teams lead by stud pitching of Nolan Ryan and Mike Scott.

The second is the 90s/early 2000s teams with the killer B's (Bagwell, Biggio, Berkman, Beltran-for half season)

The third is the current team.

Most of you may recall I ran a contest for when Cutch would hit career homerun #200.  Shortly after career homerun #200, Cutch had the most productive night at the plate and hit his first career Grand Slam with HomeRun #202.  Had Cutch never hit a Grand Slam in his career he would be the All-Time Leader in Homeruns without a CAREER GrandSlam.  That distinction belongs to long time Astro Glenn Davis.

Many players go a long time without hitting a grandslam, but there are some surprising names atop the leaders in homeruns before a GrandSlam.

Cutch became the sixth player in MLB history to have over 200 Homeruns without a GrandSlam.

Of those on the list, the most noteworthy is Jeff Bagwell who went on to have a Hall of Fame career and has some of the best numbers ever as an elite first baseman.

It's unfair to compare a toolsy outfielder like Cutch to a power hitting first baseman....but we are going to compare both player's careers through their age 30 seasons.

Both players didn't hit their first career grand slam prior to those seasons.

The similarities between Cutch and Bagwell go a bit deeper than that.

Bagwell won his first (and only) Gold Glove during his age 26 season.  McCutchen won his in his age 25 season.

Through age 30 season, Bagwell had appeared in 3 All-Star games, 2 silver Sluggers, and won a Rookie of the Year.

Bagwell had 221 HRs to Cutch's 203, giving the slight advantage to Bagwell.

Similar to my Heritage Comparisons, I am in no way comparing Cutch and saying he is better than a Hall of Famer.  I am merely showing how Cutch ranks with some of the All-Time greats of the game.

Let's finish this post with my favorite card of Cutch in 2017. 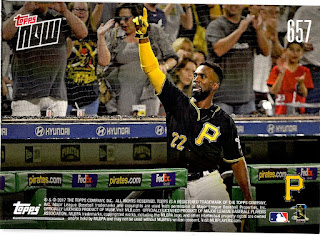 Such a historic moment for Cutch.  I am forever jealous of Matt at BobWalkThePlank for being able to witness the game in person. 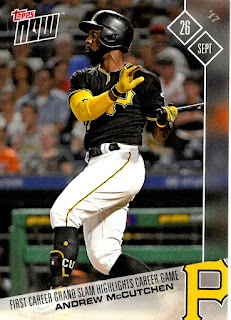 I managed to snag an unused ticket stub from the game to go with the 2017 Topps Now card.