Chase d'Arnaud may not be a household name even among baseball fans.  He has bounced around from the Pirates to Phillies to Braves to Red Sox to Padres in his utility bench player career.

When he was drafted by the Pirates he was expected to be the "shortstop of the future."  He was an above average fielder with a bit of pop and a lot of speed.

I got to see Chase win the Eastern League Championship in 2010 as a member of the Altoona Curve.  That was a year after him and the Crawdads had won the A league championship.  He felt like he would help bring winning ways to the Steel City.

Chase made his debut in 2011 and in an interleague matchup against the Red Sox in Pittsburgh, Chase laced a triple off Jon Lester for his first MLB hit.  I thought that Chase would help anchor the infield and get rid of Ronny Cedeno at shortstop. 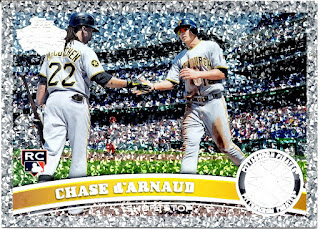 Injuries and bad plate discipline made Jordy Mercer slide into the "shortstop of the future" and Chase has begun to follow his other dream, music.

His band may one day make him a household name.

For now, he will appear as a Cardboard Cameos for my Collecting Cutch blog.

Here's a video for his song "Sucker"


Posted by Collecting Cutch at 5:26 PM