A little over a month ago I showed off my Allen & Ginter Full Size Relics from the 2017 release.  Cutch has 2 versions this year highlighted in back by the numbering FSRA and FSRB for Full Size Relic A and Full Size Relic B.  Amongst the two different pictures used were various different swatches used for each relic.

These relics tend to sell much cheaper than the mini framed relics so I decided to seek out the different jersey swatches of both the A and B versions.

I completed the "A" set by grabbing a Home White, Black Alternative, and Road Grey (with pinstripe from a Throwback jersey) 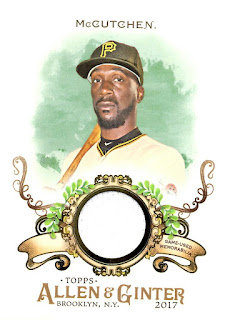 The "B" set has been a little bit trickier to track down.  I had ordered a white swatch from a seller and it appeared to be on it's way until it was "misplaced" at a post office.  The item was purchased for $3.99 at the end of July and arrived mid October.  Fortunately the seller was cool by mid August and just refunded me my money saying for $4 it's not worth the hassle with the post office and eBay.  When the item finally arrived I asked him if he wanted me to repay for the card to which he said "No.  It shouldn't have taken that long to get to you." 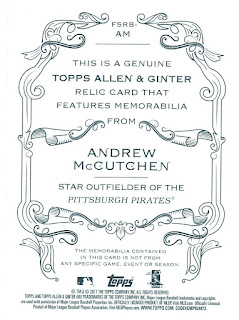 I feel slightly blessed that the seller was so cool about it and let me keep the card.

Posted by Collecting Cutch at 10:22 AM