All My Cutch Cards Featuring the Astros

I didn't have a chance to show these off during October because of the Save The Boobies event I was running (all pink cards while showing off some nice looking chests).w

Because the Astros are no longer a division rival and have been inclining while the Pirates have been declining there haven't been many cards of Cutch with members of the Astros.

That's not to say there aren't any though.

Here are a few of the ones I have.

Up first is my oldest card of Cutch with a member of the current Astros team and the cover athlete to Sports Illustrated bold prediction, George Springer. 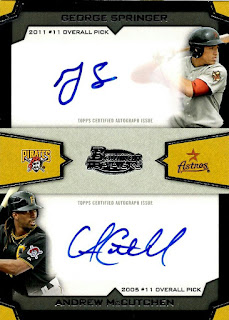 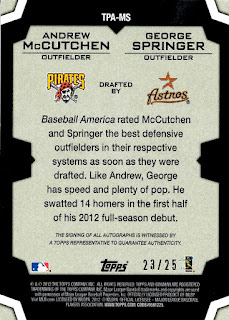 Next up is the unsigned insert card. 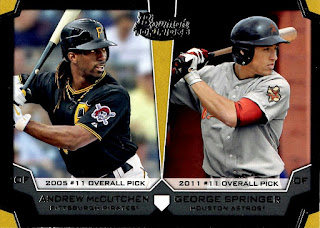 Now for the (expected) AL MVP, Jose Altuve.
I have two different parallels to this quad relic. 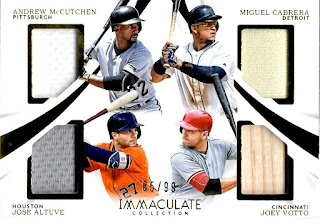 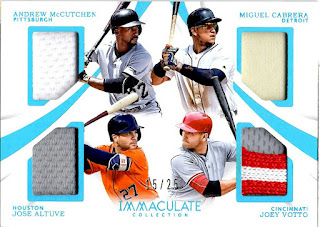 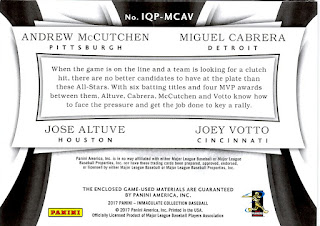 Come with me on the way back machine as I take a look at my Cutch cards with Hunter Pence.  Pence was a long time member of the Astros before being traded to the Phillies in 2011.  The trade package included Jon Singleton, Jarred Cosart, Domingo Santana, and Josh Zeid.  While none of those players contributed to the 2017 Astros in a positive way, Cosart being traded to Miami for Jake Marisnick, Colin Moran, and Francis Martes who all played for the Astros in 2017.

Also pictured on this printing plate is former Astros Colby Rasmus.  Rasmus set a MLB record by recording an extra base hit in his first 6 career postseason games.  He was on the verge of a breakout campaign and likely could have been an All-Star for the Rays in 2017 before deciding he needed to take a step away from major league baseball. 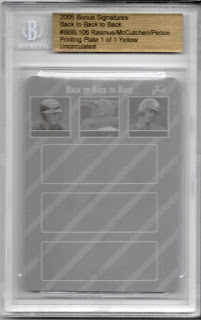 Congratulations to the Houston Astros!
Posted by Collecting Cutch at 9:28 AM