One of my favorite features on here is to highlight #tbt cards, cards that feature Cutch wearing older uniforms. 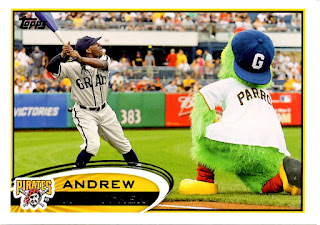 In 2012 Topps released a photo variant for card #497. It featured Cutch and the Pirate Parrot doing a little batting practice before the game.  Cutch was dressed in the old Negro League uniform of the Homestead Grays famously worn by Hall of Fame legend, Josh Gibson aka "The Black Babe Ruth".

After some quick researched I determined that the card's photo is from a July 23rd 2011 game between the Cardinals at Pirates.  The Cardinals would go on to win the game 9-1 according to Baseball Reference.  All the pregame wiffleball batting practice didn't do him much good as he went 0-3 with 2 strikeouts.  There wasn't much to cheer for in the game as Brandon Wood knocked in the Pirates lone run.  Rookie Tony Watson pitched 3 scoreless frames in relief of All-Star Kevin Correia who gave up 7 earned runs in the first 4 innings.

It sure is fun to go back and research some old boxscores.  Ronny Cedeno batted second that day and Joe Beimel got the final out to avoid the Cardinals from putting up double digits.

Have you ever researched the games that appear on the cardboard you collect?
Posted by Collecting Cutch at 1:39 PM