A little too tactful

None of us like to get cards damaged in the mail.  I remember getting a Bowman red paper 1/1 that got stuck in the machine. Fortunately the top loader took the brunt of the damage and the card was fine.

Sometimes though sellers use so much added precaution that it makes getting the card removed more in danger.

Such was the case with this card I received several months ago.

It's a 1/1 so I appreciate the card being kept safe as it would be impossible to replace. 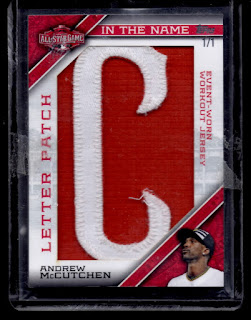 It's from Cutch's 2015 All Star Game workout jersey.

I wish I had thought to take a picture of how it was secured.  There was so much bubblewrap and space dividers around it, you would think it was a grenade.

With 2 space dividers tightly wrapped around the toploader then covered in about a foot and half of bubblewrap, this card wasn't going to get man handled by no postal machines.  Not a chance.

Rather than use painter's tape or other nonsticky tape around the card this sucker was firmly entrenched with enough packaging tape to send your next wave of Christmas presents across the U.S.

What is the most obvious way a card can come out of a toploader?

THERE WASN'T ANYTHING AT THE TOP TO PREVENT THE CARD FROM SLIDING OUT!!!

Not that it would have had anywhere to go except a bubblewrap grave.

Thanks for the workout! I definitely got my cardio in with this fun exercise.

Posted by Collecting Cutch at 5:54 AM

Email ThisBlogThis!Share to TwitterShare to FacebookShare to Pinterest
Labels: 1 of 1, 1/1, 2015 All Star Game, 2016, letter patch