I was really considering using one of my Andrew McCutchen Home Run challenge cards in yesterday's matchup.

Unfortunately the numbers didn't play in Cutch's favor as he was facing Stephen Strasburg.  For those that forget Strasburg had a historic debut against the Pirates in 2010 striking out 14 batters including McCutchen once.

Prior to yesterday's game Cutch had only 3 hits (all singles) in 22 at bats.

Who would have thought he would take Strasburg yard in the 1st inning?

Prior to the 2008 season both players were ranked as top 100 prospects in the game with Cutch at #24 and Gio at #56 according to baseball prospectus.  Gonzalez would make his MLB debut later that year and Cutch would debut the following June.

Because of their prospect status Just Minors featured the two on their 2005 Interleague Match-Ups series.

I currently have the Gold/10 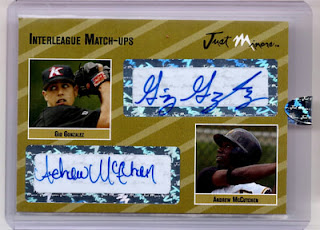 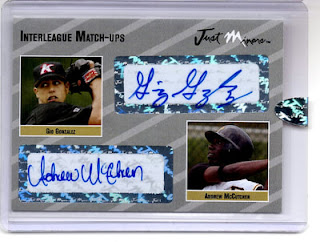 Both are still sealed by the tamper proof Just Minors stickers.
There is currently an uncirculated black /2 on eBay but the seller is asking nearly $100 for the card.

Here's hoping Cutch takes Gio yard today so I can win one of those super rare winner cards. 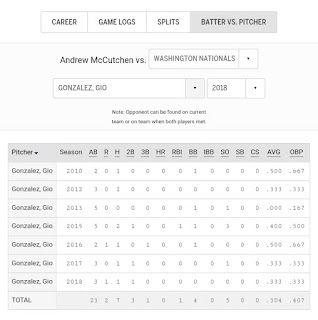 Posted by Collecting Cutch at 11:10 AM