Lot Of Great Things To Come

On Sunday night I faced the impossible task of trying to win 14 Probstein auctions that were all ending within 40 seconds of one another.

It appears that another high end Cutch collector is giving up as they have begun consigning their collection to the eBay powerhouse Probstein.

While I didn't win as many as I wanted I won enough to officially pass on trying to add more cards to the collection for a few weeks. There are going to be some monster cards coming to my collection in the next week.

I received this card in the mail late last week and it will go very nicely with one of the incoming cards from my eBay victory. 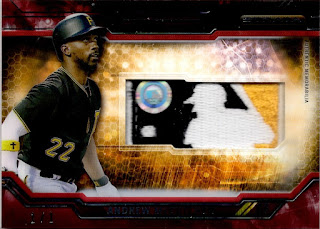 It is from 2015 Strata, a set that I fell in love with and currently have over 25 of the patches from. 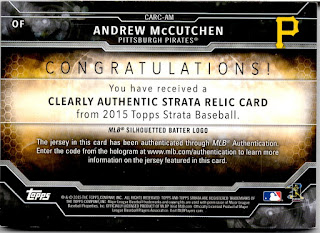 By plugging the code into the MLB authenticator it indicates that this card was in fact from the May 2, 2012 game of the Pirates vs Cardinals.

The Pirates sent newly acquired AJ Burnett to the mound and he got absolutely lit up against the Cardinals offense, giving up 12 runs in 2.2 innings.

Hot hitting Andrew McCutchen was given the day off so that another offseason acquisition, Nate McLouth, could get some playing time.  The former Pirate went 0 for 4 in the game.  He would be released a few weeks later having only gotten a few more plate appearances in a Pirates uniform.  Cutch wouldn't play in the game at all as he was given a full day off.

I remember this game so vividly.

Much like the Pirates success after this game, my life got better too.  I broke up with my ex girlfriend shortly after this game after being in a toxic unstable relationship for a few years.  I got a promotion at work with a significant pay increase.  And I found someone who I enjoy being with every day of my life.

Life got better after that game.

In a weird way, maybe my card collection will too....
Posted by Collecting Cutch at 3:31 PM

Email ThisBlogThis!Share to TwitterShare to FacebookShare to Pinterest
Labels: 1 of 1, 1/1, 2015, Logoman, strata