There have been only 2 games I was at that have been turned into Topps Now cards.

I was also at a game that was used for Russel Martin's 2013 Topps Chrome card (and consequently seen in background).

I also attended a game that was used for an Andrew McCutchen insert where he is signing a yellow Pirates helmet prior to a "Spring Training" game at Citizen's bank park.

That's it though. Only 4 known games.
Only 2 Topps Now cards sadly.

The first lead to the most expensive Topps Now base card ever produced.  That was the 2016 season opener and the birthplace of the Now program.  Francisco Liriano was selected to be card number 1 as he was the first person to hit an RBI in the 2016 season.  Much like many other years I was at the Pirates home opener.

The second was Andrew McCutchen's return to Pittsburgh. 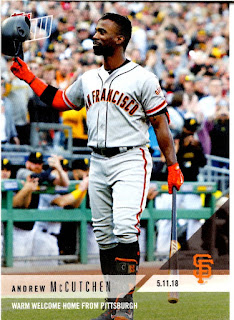 I was so happy they chose an image like this instead of a random batting photo.  This stadium was rocking!!!  It might have actually been louder than the 2013 playoff game. 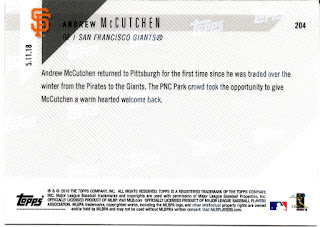 Cutch would go on to have an outfield assist and go 1 for 4 at the plate with a double.

Have you attended any games turned into Topps Now cards? Did you buy the cards for the memories?
Posted by Collecting Cutch at 5:25 AM