Could the Giants trade Cutch to a contending team looking to bolster their outfield and lineup?

Could a team use a super utility guy like Josh Harrison to be a late inning bat bench?

One thing is for sure these 2014 MVP candidates are not viewed by their current teams as being cornerstones to build around anymore.

With the offensive decline of both players I have been able to pick up a few cards here and there of both of them for significantly less than their previous prices would have commanded.

There was a time in 2015 when a certified Elite Extra Edition sticker autograph of Harrison numbered to 600 would command $50. Now?

I am able to buy autographs of him in Topps Archives for under $10 delivered for on card signatures of my favorite cards he has appeared on.

This will likely be one of the last dual cards of Cutch and Harrison produced and it's Majestic. 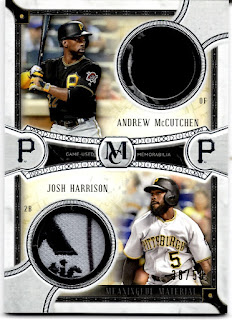 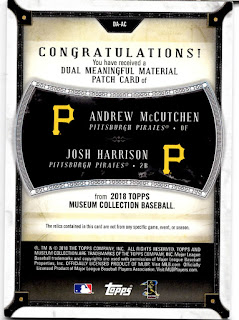 Posted by Collecting Cutch at 10:51 PM