As I mentioned yesterday I attended the Pirates debut of Chris Archer.  In a very short time Chris' personality and clue collar work ethic has already endeared himself to the City of Pittsburgh.

I was having trouble with my camera not focusing very well on my phone, but did manage to take some pictures.  I didn't take any pics of the stadium because quite honestly I have done that dozens of times with all my trips out west.

Last night was a Stand Up For Cancer day so I got my sign and wrote my friend and extremely talented artist name Josh Medors (R.I.P. my friend). My standard is to get a pierogi hoagie from Manny's BBQ (Manny Sanguillen owns it). 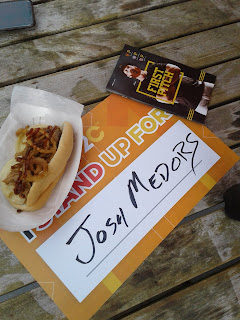 Our seats were in section 109 so we had a great view of the game. 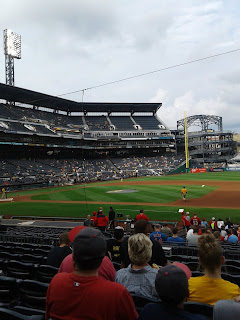 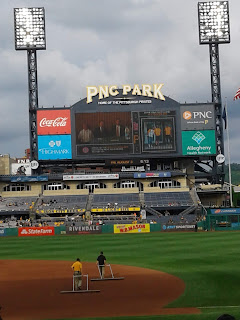 I didn't take pics of the 11 non profit charities set up for early detection or any of the baskets the Pirates wives offered for charity raffles.  I should have though.  There were some really great baskets put together from the wives of their husbands favorite things.  Nearly every basket had an autographed ball, but also had gift cards, foods, clothing articles, etc.  The one I really wanted was a giant quilt consisting of all the players signed jerseys.  Unfortunately I didn't win anything.

The game started out on a sour note as Chris Archer threw two balls before giving up a mammoth shot to Matt Carpenter putting the Pirates quickly behind 1-0.

Chris struggled with command for most of the night walking four, hitting one, and giving up 7 hits in 4 1/3 innings.  He did manage to strike out 6 in that brief start and was hurt by a series of bizarre plays in the 5th inning.  Jordy Mercer normally known for being a solid and not flashy shortstop booted an easy double play ball which was followed by Starling Marte losing a ball in the lights.  Because he didn't get his mitt on the ball it was ruled a hit instead of an error.  If you were to ask any MLB player they would say the ball should be caught.

The top of the Pirates lineup continued to hit as Adam Frazier, Starling Marte, Gregory Polanco, and David Freese went a collective 9 for 17 with 5 Runs score and 4 RBI.

Keone Kela also made his Pirates debut and threw a scoreless inning thanks to an absolute laser throw by Gregory Polanco to nail Matt Carpenter at the plate trying to advance from 2nd. 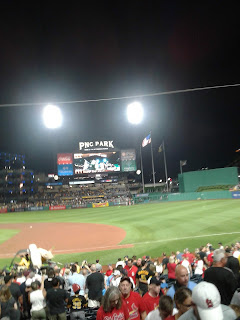 Overall I had a blast and think that this team could make a serious push to make a playoff run.  They will be getting back their best offensive player, Corey Dickerson, soon in addition to Josh Bell who has been sidelined this week. The back of the bullpen is going to be a strength and hopefully the starters can work 6 innings.  If the fans show up like they did last night and really get behind this team, they will have the ability to win meaningful games down the stretch. 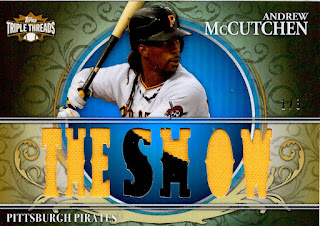 Posted by Collecting Cutch at 10:30 AM