The Pirates sacrificed two of their young athletes (Austin Meadows and Tyler Glasnow) in addition to a third unknown player to be named later to acquire Chris Archer.

I will be heading over five hours west to get to the game so that I can see his Pirates debut at the beautiful PNC Park.  The weather looks to be cool (75 degrees) with a slight chance of showers.

For some people the beach is their happy place.  For me, it's PNC Park.  It is one of the most visually appealing stadiums with the Clemente bridge in the background. 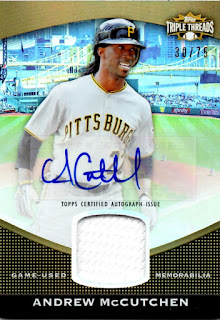 Really looking forward to Chris' debut today.  I think it is so cool that he chose not to wear his old number 22 out of respect for Cutch's significance to the franchise.

I will take pics of the game to share.

On a completely unrelated note, former Pirates utility guy Steve Pearce had a heck of a game against the Yankees last night when he lead the Red Sox over a massive victory by powering 3 homeruns and 6 RBIs.  I wrote an article about him here and stand by the fact that if he was given enoigh consistent playimg time he could be a star.
Posted by Collecting Cutch at 5:59 AM