The National Sports Convention just ended and I considered making a set of posts about all the National exclusive cards I have of Cutch, but then the Pirates made a blockbuster trade for Chris Archer and I went out to Pittsburgh for his debut.

So rather than grouping all the cards over a series of consecutive posts I will just randomly show them off over the course of time (or maybe all next year for the Convention time frame as I haven't quite decided yet).

Cutch began gaining superstar status in 2012 following his first All Star Game appearance in 2011 and an extremely hot start to the year in 2012.

Through June 2012 he looked like the clear cut MVP as the Pirates were battling for 1st place in the division and at one point in July Cutch had reached a season average of .386.

As part of the National circuit, Panini made a series of restamped cards including the Elite Extra Edition you see below. 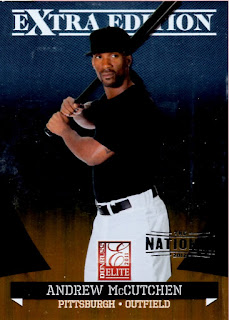 This would have been a good Star Wars Day card as it is numbered 4/5 and I celebrated May the 4th this year with cards all numbered 4/5. 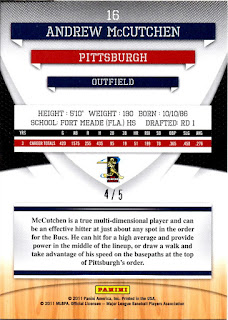 Posted by Collecting Cutch at 5:23 PM