The year was 2009.  The Pittsburgh Pirates were on the verge of becoming a franchise with the longest consecutive years of losing streaks in North America.  Things were not looking bright for their immediate future either as they had no pitching help coming up in the minors.

The team had just traded away many of their previous season's All-Stars.  Nate McLouth, Freddy Sanchez, Jack Wilson, and Jason Bay had all been traded in the previous year or through the 2009 trade deadline.

The lone bright spot was the Pirates top prospect (#13 overall) had made his debut in early June and hit the ground running. Literally.  His first at bat was a ground ball up the middle then Cutch had proceeded to steal his first base.

By July he was looking like a contender for the Rookie of the Year.

It wasn't until August 9th that Cutch got some more "National coverage" when he hit 3 HomeRuns against the Nationals, another National League basement dweller team.

There have been numerous cards over the years that Topps has produced referencing Cutch's big day at the plate, but the biggest of them is this 2010 Allen & Ginter Boxtopper. 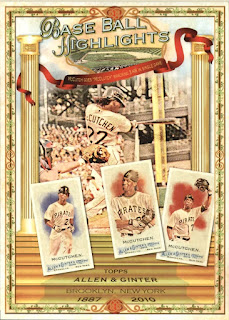 I think it would be really cool to get custom cards of these "minis" on the card actually made. 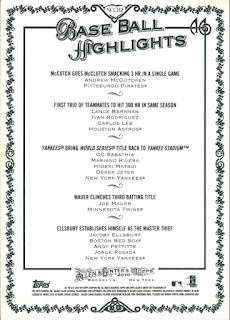 The Pirates are playing Cutch's new team, the San Francisco Giants this weekend.  Here's hoping the Pirates can make a serious run in the final two months and pick up some ground for their playoff push.
Posted by Collecting Cutch at 9:46 AM