Shelby coming round the mountain

I attempted 14 failed HR challenge cards this year until I finally got one right.  During the month of June I used several codes and always missed by a day.  If I predicted a HR on Tuesday, he would hit it Wednesday.

Finally on the last day of the month, Cutch hit an opposite field solo shot off struggling Shelby Miller. 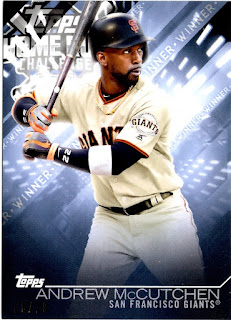 I liked the matchup as Cutch has seen Shelby many times in his career as they were division rivals when Cutch was with the Pirates and Shelby was with the Cardinals.

There were only 19 winners for the month of June. 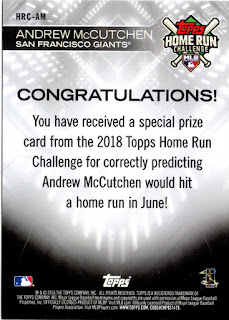 So far I have an April redemption (black) and June redemption (blue).  Cutch failed to hit a HR in May which is a damn shame because that redemption was pink and would have been perfect for the Save The Boobies event I do each year.

Posted by Collecting Cutch at 1:43 PM