Rookie Of The Year Race?

The National League has a lot of close races as we enter the final month of the season.  From the East and West coast divisions to MVP to Rookie of the Year to Cy Young there are a LOT of tight races that could literally come down to the final games to determine a winner.

If I had to pick my favorites here is what I would vote for
West: DiamondBacks
Central: Cubs
East: Braves

I think the hardest to determine a winner is the ROY decision as Acuna, Soto, and Albies all look like they could win the award.

During Andrew McCutchen's rookie season of 2009 he immediately made an impact on Pittsburgh baseball.  He would get a hit in his very first at bat.  He finished the season with a .286/.365/.471 slash line in only 108 games.  He had 12 homeruns and 22 stolen bases.  He had a memorable walk off homer against the Phillies where he "Air Jordan" his helmet on the round tripper and also had a 3 homer game against the Nationals.

His 2.4 WAR earned him a 4th place finish behind 1.1WAR and winner of the award Chris Coghlan.  J.A. Happ and Tommy Hanson.

Cutch didn't leave 2009 without getting some hardware though.

He would win the Baseball America Rookie of Year award and be voted to the Topps All Rookie Team. 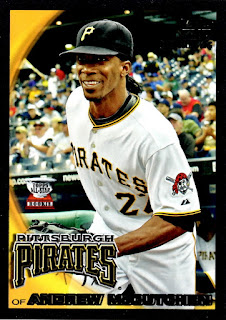 I am currently still in search for a 2010 Topps Heritage Chrome black refractor, but do have four of the 2010 Flagship card parallels featuring Cutch with the Topps Rookie Trophy. 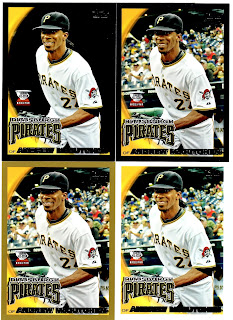 Top: WalMart Black and Black Hobby/59
Bottom: Gold/2010 and Base 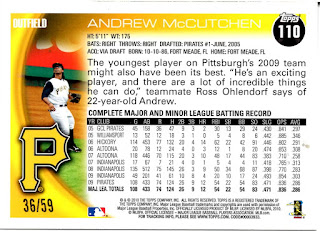 I have 7 of the 2010 Topps Chrome parallels and 2 of the 2011 Lineage Reprint Parallel Autos featuring the same image.
Posted by Collecting Cutch at 5:40 PM