For the next few days I will be showing off my Allen & Ginter Cutch Collection.  I did something similar a few years ago around the time of Gypsy Queen's release when I showed off all my Gypsy Queen parallels, autographs, minis, relics, plates, etc.

Today we begin with the base and all forms of minis I have.  I will also show off some insert cards today that feature Cutch from A&G.

Friday I will feature autographs and relics.

Saturday I will feature rip cards and cards that came from Rip cards.

Monday has buybacks on the agenda

Tuesday will be all other 1/1s

So let's begin with the base cards, shall we? 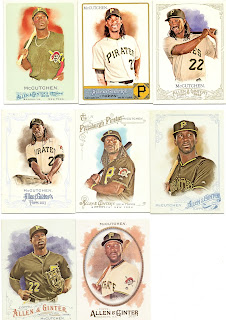 As for the parallels, Topps has made "hot box" parallels to chase over the years and beginning in 2015, the 10 year anniversary of the product, they began to offer Ginter X, an online exclusive set with black backgrounds and bold parallels to chase (silver and red) for the minis. 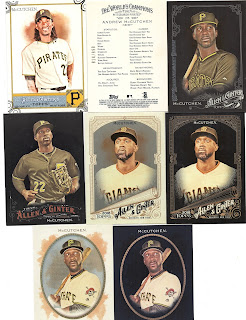 Now for some minis.  Backs are shown for cards that feature different backs than the standard mini word stats. 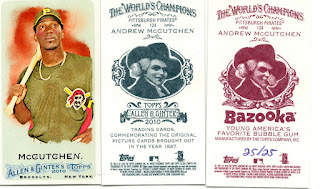 Have: Base, A&G back, A&G red back/25
Need: No Numbering, Black Border 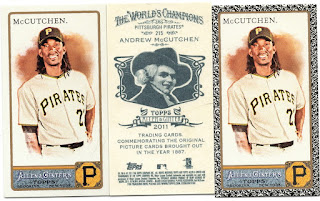 Have: Base, A&G back, Black Border
Need: No Numbering, Red A&G back/25

Have: Base, A&G Back, Red Back/25, Gold Border
Need: No Numbering, Black Border

Have: Base, Red back/25, A&G back, Black Border
Need: No Numbering

Have: Base, A&G back. No Numbering, Black Border
Need: Red back/25, Gold Border 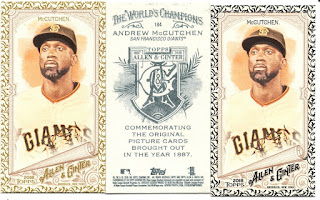 
To wrap things up are the inserts.  Because of the interesting facts on the back, I will show the fronts and backs for each card. 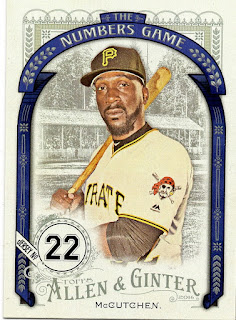 This insert set looks at the number 22 both in terms of the Pirates organization and across MLB History. 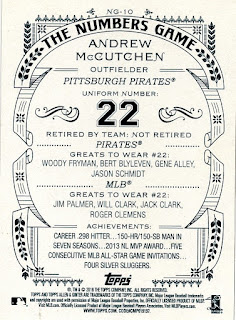 It also features some quick "stats" about the player's career with what they have accomplished thus far. 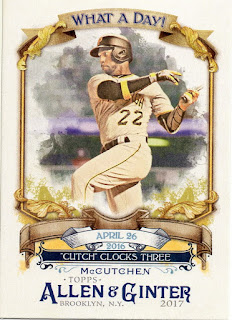 Had this set been released in 2018 instead of 2017 there is no doubt that Cutch's 2HR 8RBI 4 for 4 performance in his final home game would have gathered the saying What A Day instead. 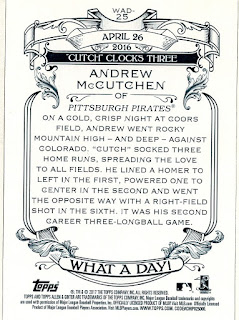 A 3 HR performance against the Rockies with balls hit to all sides of the field gets rewarded with the saying What A Day for this insert set . 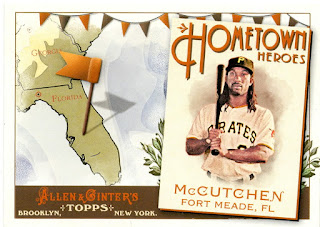 When I first started getting back into collecting as my featured hobby, I fell in love with this insert set.  The design was great and classy and featured a handful of Pirates players, despite the team losing over 100 games the previous year. 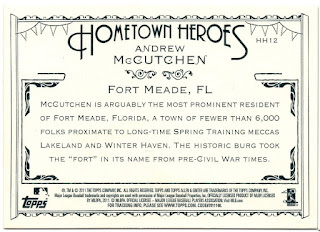 The backs tell the history of the town/city of the person depicted on the front.  Talk about a small town where Cutch grew up.  Only 6,000 residents live in Fort Meade. 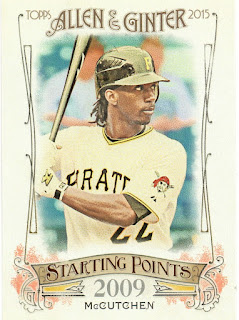 I vividly remember Cutch's first at bat in the majors.  He made his debut against the Mets and after taking a few pitches he roped a pitch up the middle for his first hit in his first at bat. 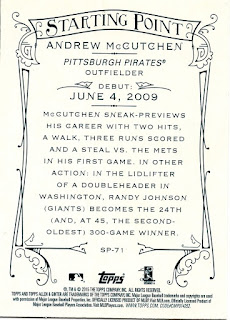 The back of the card talks about Cutch's performance in his first game.
2 Hits, a walk, stolen base, and scoring 3 runs in his MLB debut.  He made it clear that he wasn't going back to the minors once he made his debut.
The back also discusses how Randy Johnson became a 300 game winner that same day at the age of 45. 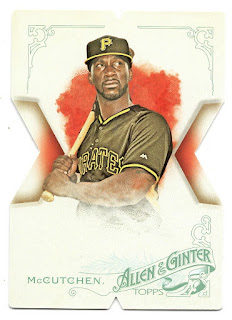 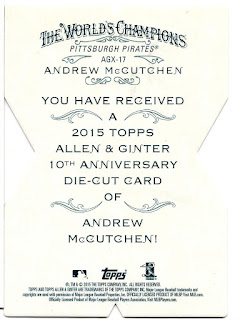 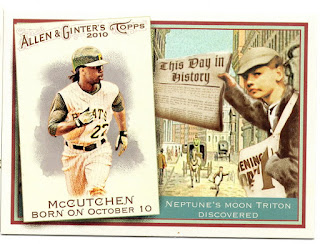 I have a buyback of this card that I will show off in a future post. 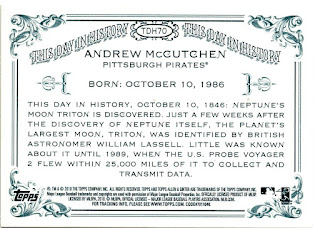 This insert discusses different world events that occurred on the player's birthday.  In the case of Cutch, October 10th is highlighted on the back of the card. 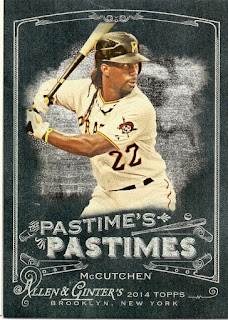 I mentioned this card as one of my favorite insert sets when I did a top 10 list a few years ago of my favorite Cutch inserts.  The chalkboard like design and bold black background no doubt helped influence the idea of Ginter X as this insert series was popular with fans for it's design. 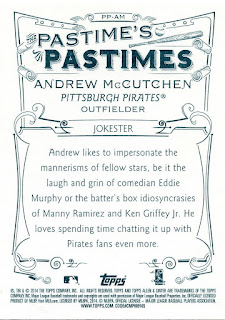 The back discusses Cutch's jovial nature and ability to have fun on and off the field. 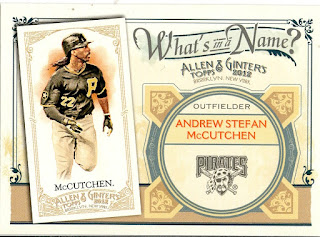 The concept of this insert is really good.  Unfortunately I feel like the front design isn't very good. I like the A&G mini to the left, but the circle with the Pirates logo and player's full name just looks odd to me. 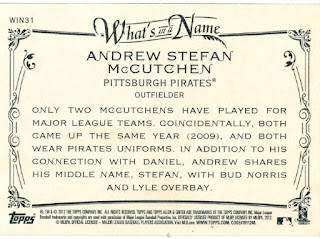 The back discusses that other McCutchen who was with the Pirates from 2009 to 2012. It also discusses other players who share Cutch's middle name.


Do you like these series of posts where I show off all my parallels over the years of a certain brand?

What are your thoughts about thus year's Allen & Ginter design? Do you like the inserts they're including this year?
Posted by Collecting Cutch at 10:28 AM