When you super collect a player, you learn everything there is to know about different parallels and what to expect from them.

Look at the 3 cards below.  At a quick glance they appear to be the same card, right?

Panini is known for their Statline parallels where they use numbers from a player's career, season, and single game stats and make serially numbered parallels to chase.

Well, let's take a look closer at each card starting with the card on the left. 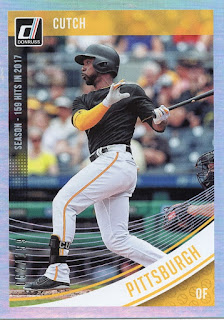 
Now let's move to the card in the middle. 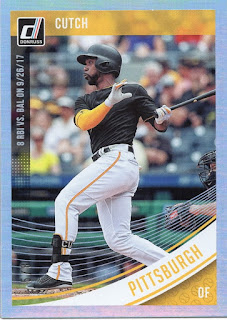 The identification on left of card talks about Cutch collecting 8 RBI in a single game.

This parallel is what is known as a Game Day Statline parallel.  It is numbered to only 8 copies. 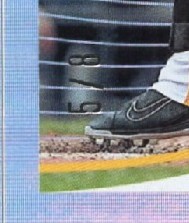 Now this is where things get weird when we look at the card on the right. 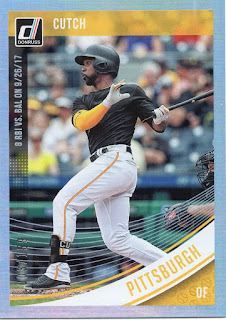 The card has the game day statline of 8 RBI on the left.

But the card numbering is numbered 159 copies NOT 8

This is a case of mistaken identity and bad serial numbers.  The card likely was intended to be numbered to only copies(game day stat) but was instead numbered to copies (season stat)

So that concludes our detective work for today.  Keep your eyes open on serially numbered cards, you may find something that's not quite right.
Posted by Collecting Cutch at 1:15 PM