Cutch is the last Giant to wear #22

It was announced Sunday that the San Francisco Giants are retiring #22 for Will Clark.

Will Clark played 8 seasons and was a 5 time All-Star with the club.  During that time he won a Gold Glove and Silver Slugger and was a top 5 MVP vote getter four times.

He finished his 15 year career with a triple slash line of  .303/.384/.497.  He collected 2,176 hits and 284 homers among the four teams he played with (San Francisco, Texas, Baltimore, St. Louis). Clark is definitely a member of the Hall of Very Good, but could he one day be elected to the Hall of Fame?

With it likely that the Giants won't issue #22 to any Giants player over the next six weeks it appears that Andrew McCutchen will be the last San Francisco Giants player to wear #22 before it is retired.

Next year when #22 is officially retired by the Giants I will highlight my 22 favorite Giants cards of Cutch.

In the meantime though here are a few cards that show the full 22 on Cutch's Giants cards. 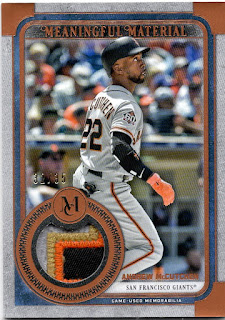 Cutch has two different photo variations to,chase in 2019 Topps Museum Meaningful Materials.  Each of those photo variants are believed to have 5 different color parallels to chase. 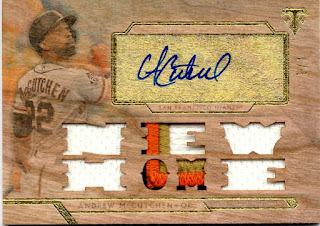 This is my only Triple Threads Wood 1/1 of Cutch I own.  I always wanted a Pirates one, but they were going for $200+ and only featured relics when Cutch was in his prime.  I am pleased that I was able to get an autographed one (albeit a sticker) for under that mark. 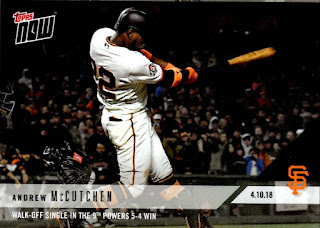 Cutch became an instant fan favorite in SF when he got 2 walk off hits in his first 10 games. 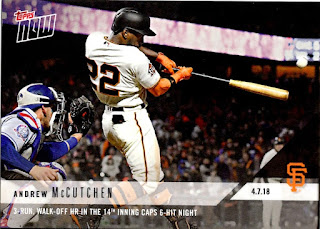 This walk off was one of the most memorable moments of the 2018 season. Cutch collected 6 hits in the game then launched a 3 run walk off homer in extra innings to seal the victory against long time rivals, Dodgers. 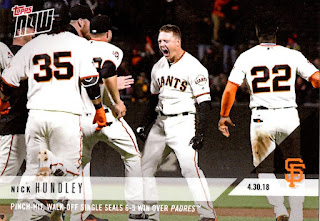 Here is a cameo card of Cutch running towards Nick Huntley after another walk off victory. 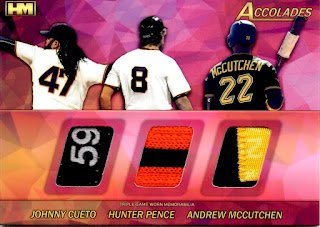 No airbrushing on this triple relic with two other San Francisco ball players. 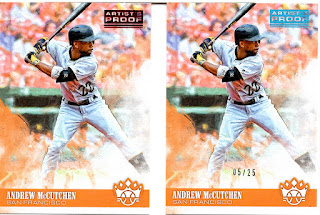 Bad airbrushing on Panini's end for this San Francisco card of Cutch.  The yellow gloves and jersey number indicate that minimum effort was put into making this a card that resembles what Cutch wore in his brief time at the bay. 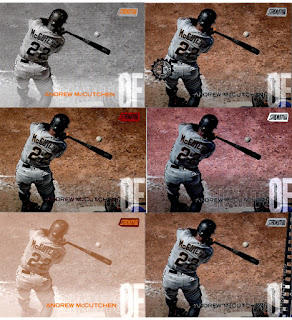 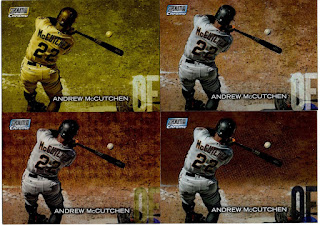 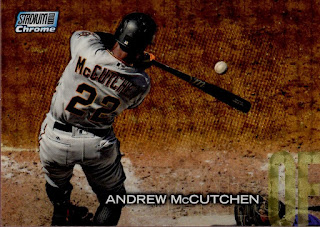 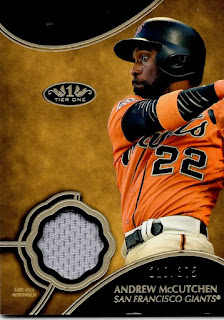 Here is just a boring relic from Tier 1. 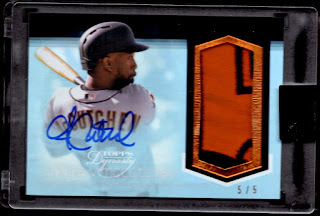 It's tough to see with the nice on card signature, but this Dynasty card features a great swatch of patch. 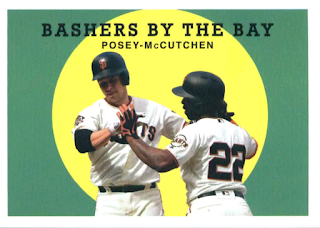 
Posted by Collecting Cutch at 1:27 PM