Yesterday news broke about two former MLB players being part of one of the largest drug raid in the history of the Dominican Republic.

Octavio Dotel and Luis Castillo were both connected to a large drug trafficking raid per the ABC news story.

Octavio Dotel began the 2010 season as the Pirates closer.

He was unbelievable in his brief time with the Bucs.  In 40 innings with the Pirates he converted 21 saves and struck out 48 batters.  Keep in mind the Pirates only won 53 games for the year and only had 36 wins at the time of the trade.

He would be traded to the Los Angeles Dodgers for Andrew Lambo and James McDonald, both players who I was a fan of personally.

This is my only card that features Dotel on the Pirates with Cutch. It is from the 2011 Heritage team card. 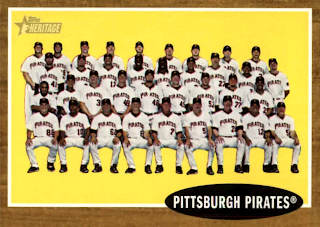 Dotel is seen wearing number 29 on the far right of the second row up.

The image itself is from the 2010 Team Picture Day 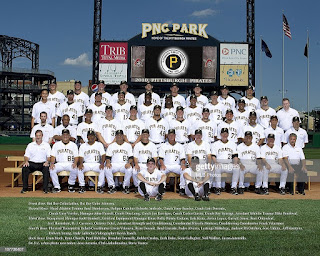 I will finish with this video of Dotel's entrance for when he closed games for the Bucs.  It features lots of police sirens.

Posted by Collecting Cutch at 9:38 AM