When Andrew McCutchen left a June 3rd game which lead to season ending surgery, the Phillies were in first place of their division and were 7 games above .500.  Andrew had batted leadoff in 59 of the 60 games the Phillies played and had a WRC+ (weighted runs created) of 124 (good for 6th place in all baseball).  Cutch had been leading the National League in walks for an entire week after his injury due to how many times he walked and got on base.  Cutch averaged 4.45 pitches per plate appearance (good for 6th among 251 qualified hitters).

Now two months later after the terrible injury that ended McCutchen's season, the Phillies are still searching for a leadoff hitter.  The Phillies have tried Cesar Hernandez, Jean Segura, Bryce Harper, and Corey Dickerson at the lead off spot since Cutch went down.  The team's leadoff position since McCutchen had the injury is slashing .203/.273/.330 with only a 59wRC (second worse in baseball).

The team has played below .500 ball since Cutch went down.  To say that the McCutchen acquisition may have been the best pickup the team made in a year that saw them add 4 other previous All-Stars (Bryce Harper, Jean Segura, JT Realmuto, David Robertson) could be a shocking tale, but one based in reality.

Andrew has been appearing in a lot of new releases as an autograph subject in the past 2 years since leaving Pittsburgh.

While he wasn't included in Donruss or Optic as a base card he did get an autograph card in Optic Signature Series. 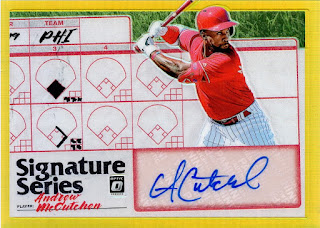 This very low numbered gold Prizm card features a great design using a scorecard.  The scorecard isn't from any actual game as the background used is the same for all autograph subjects. 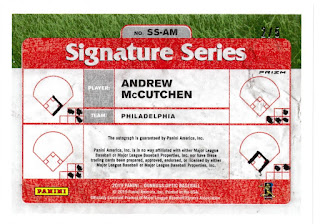 It is fun to note though that Andrew hit a Homerun in his very first at bat as a Phillie to kick off the 2019 season.

This is my first of hopefully many more Panini Phillies autographs to come.
Posted by Collecting Cutch at 3:29 PM