It's not a schooner, it's a sailboat

Growing up in New Jersey as a kid whose most influential teen years were in the 90s, are you surprised that one of my favorite comedies is Kevin Smith's Mallrats?

You shouldn't be.
I used to be able to quote it easily.

I am a big comic fan so any time that Stan Lee makes a cameo is a good movie in my eyes.

Well in case you missed it during all the off-season hotstove news, John Jaso, former Pirates deadlocked 1B and Rightfielder selected to retire at season's end.  While Jaso wasn't a superstar, I thought he was an easy guy to root for and super friendly with the fans.

What's Jaso's retirement plan?
"I have a sailboat" 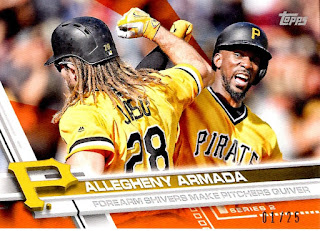 Such a cool image of the former Pirates.

Posted by Collecting Cutch at 12:04 PM