It was just a little over a month ago that I shared my 2,000th unique card of Cutch.  That card was monumental in the double millennia mark, but was actually a fairly common 2017 Chronicles parallel.

The next milestone card is a big deal. 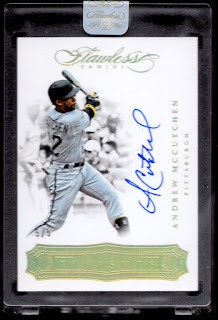 2017 Flawless was released just over a month ago and while I am still trying to grab more cards from this high end release, I must say that this VERY low numbered (5/5), eBay 1/1, on card, already magcase piece of cardboard truly lives up to it's name: Flawless.

It's been a very long time since Topps gave us on card autographs of Cutch, but Panini has been putting about 10 in each of their high end products for 2017.

This Flawless Finishes card discusses the Pirates come from behind victory over the Arizona Diamondbacks last year.  You may recall that I have talked about that walk-off before when I showed off the 1/1 Golden Ticket from Topps Now! 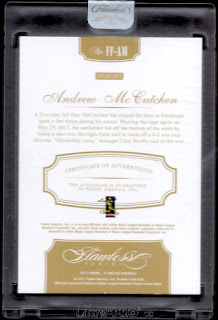 Posted by Collecting Cutch at 9:09 AM