I don't watch a lot of "live" tv.  Quite honestly, I am usually too busy to make sure I am home at a certain time to watch something daily or weekly.

I am however a Netflix and chill kind of person.  Well....Netflix anyway.

One of the shows I have been watching lately is a documentary about Adam Trent called The Road Trick.  Adam is an American magician who takes his magic act to Europe and films his interactions with Europeans while he basically sees what that part of the world has to offer in terms of culture.

Man do I wish I had that guy's life just for 2 weeks.  In the first four episodes he has partied hard in Budapest, met one of the most recognized grafiti artists of Germany, spent an entire day courting a super model around, met a family run circus, and made one of those stoic royal guards actually smile and talk.

There is only six more episodes for me to watch and I am now considering watching his show in Atlantic City at the end of August.

The guy is a modern day illusionist. 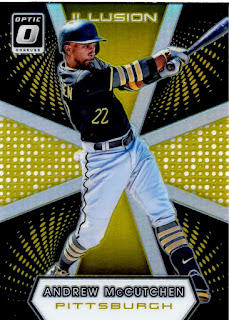 I snagged another 2016 Optic Illusions parallel. 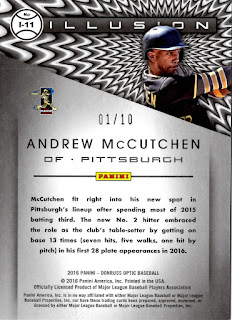 It is the gold numbered to 10 and joins the other three I showed what seems like forever ago last November when discussing the trailer for the Thor movie and linking the characters to cards of Cutch.

Posted by Collecting Cutch at 6:34 AM