Josh Bell preserved his rookie status this season by only having 147 official at bats last year.  The Pirates did this intentionally so that he could compete for the Rookie of the Year.  Many thought at season's beginning that it would be Dansby Swanson's to lose.

Well they were right as Swanson has been substandard.  However it was a Dodgers rookie who is the clear cut favorite to win Rookie of the Year.  Cody Bellinger has the award locked down having crushed 36 HomeRuns and driving in 82 for the Hollywood franchise.

Elsewhere in Pittsburgh is a dreaded first baseman that NO ONE is talking about nationally.  Josh Bell, the second round talent that broke the CBA draft rules, is crushing the ball albeit for a no contender team.  With his HomeRun yesterday Bell has now surpassed Chipper Jones for most HRs by a switch hitter rookie in the National League.  His 24th blast on the year has also pushed him closer to 80 RBI on the season.

So while everyone is talking about the great year that Bellinger is having, let's not forget that IN PITTSBURGH there is a rookie putting up really good numbers. 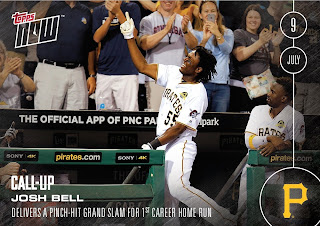 Cutch is amused ever so slightly that the Dodgers get all the attention.
Posted by Collecting Cutch at 2:17 PM