Money and WAR, what is it good for?

This 2017 Immaculate card features 4 guys who are on the verge of having Hall of Fame careers.  All four players were signed to contract extensions within 2 years of one another and all player for smaller market teams.  There's no New York, Chicago, or LA players here.

An article for the Pittsburgh Post Gazette was recently written about how frugal the Pirates have to be in terms of their market and valuing. 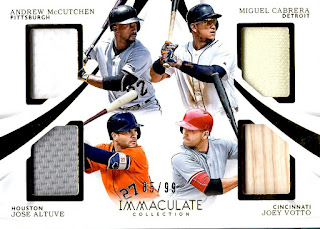 I will take a look at all four players contract extensions and calculate their WAR as provided by Baseball-Reference.  It's understand that 1 WAR is currently valued at roughly $8 million.

Let's begin with the top right corner and work our way around clockwise. 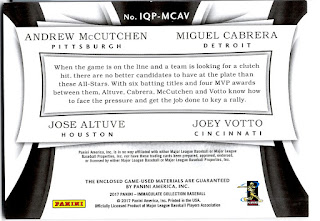 So to recap since signing the contract extensions the teams all received positive returns on their investments so far.

The Tigers seem to be in severe jeopardy of recouping value on Miggy if his numbers continue to decline.

Votto continues to put up outstanding numbers and won't be a free agent until 2023.  His numbers could begin to decline as the contract wears towards the end.

Both Cutch and Altuve contracts have provided the most benefits to the teams this far and both teams have club options to pick up the contracts of the players at season's end.  Altuve is a lock for having his contract picked up and I suspect Cutch will get his option picked up as well since there will be no asset returned to the team if it's not exercised.
Posted by Collecting Cutch at 10:34 AM