Congratulations and nothing else...

Tier 1 tends to put out a bunch of lousy jersey swatch single relic cards in their product year after year.  For being a high end set, I would be extremely aggrevated if I got a single small jersey relic in a pack.  Each pack contains only 3 cards (1 relic and 2 autographs).

Here's how I have always viewed Tier 1.
It's an autograph chase set with a few relics as basecards.   I have a few Cutch autos from Tier, one of which was recently acquired from BobWalkThePlank.

There are some extremely nice looking autographs in the set year after year.  Many are on card and have some of the hottest young players in the game in addition to Hall of Famers.

I don't want to hate on the set as a whole though because there are some nice relic cards that can come out of the set.

Such is the case for the Prodigious Patches I recently purchased, which you can see below. 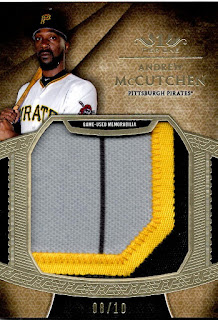 You might look at the pinstripe and Pirates patch uniform thinking, when did they wear uniforms like that?

The answer is the late 90s and early 2000s when the team was lead by Jason Kendall, Aramis Ramirez, and Brian Giles. 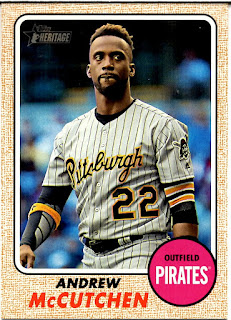 As you may recall I showed off this Super Short Print (SSP) Heritage Throwback card back in June.  The card commands hundreds of dollars because of it's rarity and master set collectors.  The patch on the Tier 1 card I recently got is from Cutch's jersey number "2".

Video highlights from the game can be found here. 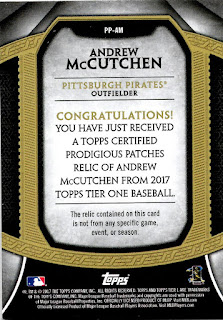 The back of the card wants to CONGRATULATE you on receiving this card along with some fine print legal information.  No stats.  No write-ups.  Just congratulations.

Speaking of Congratulations...
I want to thank everyone who participated in the Cutch hits #200 contest.  Greg and SCC will be receiving the big prizes (Hall of Fame Autographs), but for everyone who predicted a date I am going to offer up a consolation prize.  If any of you play Fantasy Football you know the joy (and frustrations) of watching a game that your team isn't playing in, but you want 1 or 2 players to do good in those games.  There's probably not a lot of Titans fans here, but if you got Demarco Murray, you're paying attention to how the Titans are doing.

I am offering up this fun rooting exercise for the blogosphere and those that predicted dates.  If Cutch hits a HR on a day that you thought he would go yard for #200 you will receive a prize.  I will try to make the package focused on your team and collecting ways.

The first person to get a prize will be Daniel from It's Like Having my Own Card Shop.  Daniel predicted Cutch would hit #200 on September 16th, but in fact hit career HR #201.

Thanks as always for reading the blog.
God Bless!
Posted by Collecting Cutch at 4:48 PM