I didn't hear anything about this from my Lids store, but apparently Topps has partnered up with New Era to make a 32 card set with the 2017 design in addition to about 20 players using the 1987 design.

Details on the card set along with the hat relics the company produced can be found here.

Once I found out about the promotion I had to add this Cutch to the collection. 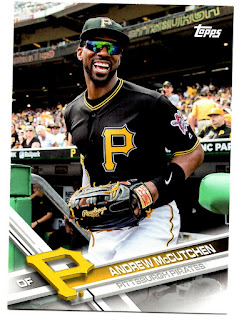 It features an image of Cutch we haven't seen on a Topps card yet (see how much more fun that is for us collectors Topps?) 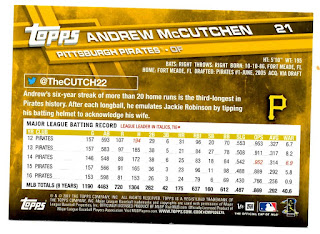 On the back it has the same basic information as the regular release, but with the New Era logo on bottom corner and a different number.

It has Cutch's career stats on the card.  In only 8 years, Cutch has produced 40.6 WAR.  Hall of Famer Jim Rice had a career 47.4 WAR.  Even if Cutch only produces 2-3WAR over the rest of his career he should no doubt be in HOF discussions.
Posted by Collecting Cutch at 7:57 AM