We are probably all aware of some of the sayings found on the front of Triple Threads cards.

This page here shows off some of the more memorable Triple Threads cards produced over the years.  Some of them reference player nicknames like "Muddy Chicken" (Dustin Pedroia), or "Don't ya know" (Robinson Cano).  Others may reference pop culture songs like "Its Hamel Time" (a pun for Cole Hamels referencing MC Hammer).  One of my favorite combos I saw was Fausto Carmona and Grady Sizemore of the Indians with Joba Chamberlain of the Yankees.  The relics spelled out "Bug Off" referencing the postseason game when a bunch of midges attacked Joba's face.  There's a bunch of good ones out and a simple google search can help you find them.  I will reveal the worse placing of relics near the end of this post (pun intended) 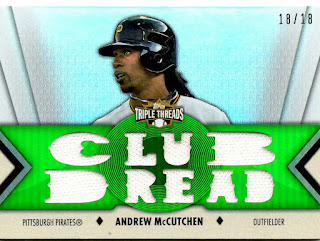 In the past six months I was able to add the "base" parallel numbered to 36 copies. 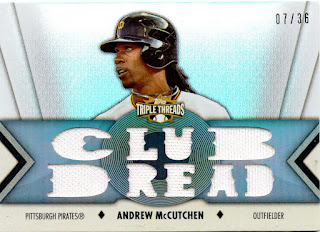 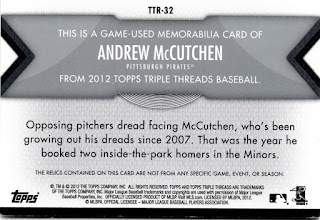 The Back of the card discusses how Cutch began growing his dreadlocks back in 2007 before he ultimately cut them off in 2015 for charity (of which I own one of them).

Here is an article (written back in 2015) looking back at all the tweets made for Cutch cutting his hair. 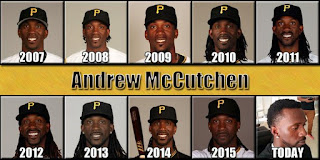 Now I promised at the top that I would reveal the worse placement of relics for their triple threads card.

Rhonda Rousey "In Her Ass"? 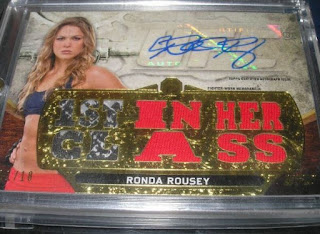 The 1st and Cl are tough to see, right?

Do you have any Triple Threads cards with fun sayings? What are some of your favorites you've seen?
Posted by Collecting Cutch at 7:02 AM