It's been awhile since I have done a This Day in Cutchstory.

This Honus Bonus 1/1 commemorates Andrew McCutchen hitting a homerun off Kevin Gregg.  It was his career 129th homerun. It was opening day 2015.  Johnny Cueto had been dealing zeroes through the first 7 innings, but the Pirates elelvated his pitch count.  The Reds brought in Kevin Gregg who was able to get two quick outs in only 4 pitches.  The Pirates were down 2-0 heading into the top of the 8th inning and former MVP Andrew McCutchen came to bat with 2 outs and Josh Harrison on first.

On the first pitch by Kevin Gregg, Cutch sent the ball sailing deep over the centerfield wall to tie the game up.

Gregg would be taken out and Jumbo Diaz would eventually come in to get Starling Marte to strikeout. 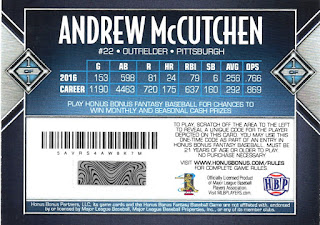 The Pirates lost the game 5-2.

I guess the saying of "Never Trust a man with two first names" applies to bullpen pitchers too.

Have you ever used the saying "Never trust a man with two first names?"

Do you know the origin of that saying?
Posted by Collecting Cutch at 12:11 PM

Email ThisBlogThis!Share to TwitterShare to FacebookShare to Pinterest
Labels: 1 of 1, 1/1, Honus bonus partners, Kevin Gregg, This day in Cutchstory