Is there really gold at the end of a rainbow?

The amount of parallels in today's collecting world is insane.  I don't use TCDB, but the site lists that Andrew McCutchen has 5,902 cards to collect.  That is a lot of baseball cards to collect for a guy with just barely over a decade of service time in the majors.

I only have about half those cards.

While I do like to chase after many many rainbows, there are a few that I focus on more than others.  Prizm and Bowman Chrome have traditionally been my favorites to go after because of the amount of shine and refracting looks.

I have been looking at Topps Fire 2018 as another set I would like to eventually chase the entire rainbow for.  I feel like Fire has improved every year since it's initial release.

2018 Gold Label is a release that I am getting very close to completing as well.

Gold Label is a set that I see improvements for each year as well.

There are 4 different colors to collect in addition to the base (pictured above).  As you can see in the picture above for the base version there are 3 different pictures to the left.  These help to distinguish, yet another parallel besides the color of the card.

Class 1 is your traditional easy to find class.  Class 2 is the next tier up (think of it as a SP).
Class 3 is the top tier and the hardest to chase after (a SSP)

The 4 different color borders to chase for each Class have unique numbering and rarity.

All the Gold Label Golds are 1/1s, regardless of Class. 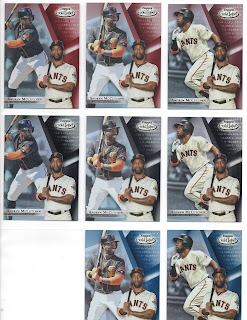 As you can see from my page that I scanned in I still need the blue Class 1 numbered to 150.  It's on my wishlist for Santa this year.  I feel confident in saying that 2 years after release I will be able to knock out all the cards that aren't 1/1s to complete most of this rainbow.

However....
I also still need all 3 of the different classes Golds that are all numbered to 1/1.

I thought this particular set would show how crazy supercollecting a star player is in today's collecting market.  So even though I still have 11 cards of one player from one release, I still only have 73% (11 of the 15) for this particular release.
Posted by Collecting Cutch at 11:19 AM