With the growing pandemic of the Coronavirus making going outside the house more threatening everyday, I am catching up on a lot of old tv shows I used to watch.  (I am also doing a lot of silly impulsive buys)

In 8th grade, myself and two of my closest friends were spending the night at my friend's house to "work on a school project".  School had just started up again and we were also looking to hang out.  This is before smart phones and before the internet in general.  It was a Friday night and we had the entire weekend at the house to ourselves.  Yup we were those kids that all said we were over others houses.  Looking back it wasn't the smartest thing, but we all lived within a mile of each other so I guess our parents were more trusting of us than I would have been.

Well in addition to "doing the school project" we also invited some girls over that lived nearby and we all watched X-Files.  I won't go into any further details of the night or some of the shenaningans we did as young teenage boys the next day, but the episode I specifically remember was Mulder was in Puerto Rico at an abondaned observatory looking for proof of aliens.  I remember my two friends were really into it because it was the season 2 premiere.  I confirmed that was the episode I so vividly remembered as a kid when I saw it again for the first time in nearly 25 years.

From that moment on, I was fixated on all things X-Files.  The premise of it with monsters of the week episodes and the ongoing story of Fox Mulder's sister missing and belief that there is truth out there had me glued every week for new episodes.

My grandparents on my dad's side would watch the show weekly too and when my parents wanted alone time, they would drive me over there to watch the show with them knowing how much I began to love the show.

I also collected all things X-Files.  I had the comic books, the series 1 and 2 trading card sets I put together myself, scripts that I bought at Suncoast video, VHS tapes, magazines featuring Gillian Anderson and David Duchovny.  I found myself working with my dad on weekends so I could get money to buy more things X-Files.

When I moved out of the house after high school I chose to throw all things X-Files out.

I just made an impulse buy during the initial isolation week and bought a box of X-Files trading cards to open.  I haven't opened it up yet, but will be saving it for a rainy night.  It will hopefully bring me back to that joy of being in 8th grade and watching the season premiere again.


On a completely different subject, but tying into all things "X" here is a very difficult card to find from Ginter X. 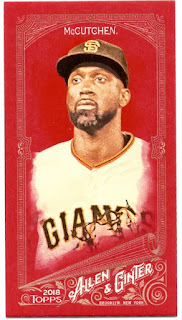 It is the red mini parallel 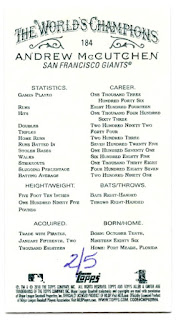 which is hand numbered on the back 2/5.

This is my only Ginter X parallel I have of Cutch for any year.  I have a few of the full size base cards and a few of the black Base minis.  I wish I could add more, but they so infrequently pop up for sale.


I would love to add a 2019 Ginter X red mini parallel as I think it would look really sharp with the Phillies colors.  However, I haven't seen a single one pop up for sale on the usual secondary market hotspots.

Until I see one for sale,
I Trust No One (Topps specifically)
but must believe that
The Truth Is Out There.

Have you ever been on the search for a card that you are certain exists, but have never seen on available?

Did you watch X-Files when it first came out?  Have you watched any of the newer season stuff?
Posted by Collecting Cutch at 7:10 AM