What Will Become Of The National?

News broke over the weekend that SDCC (San Diego Comic Con) was cancelled this year.  I am not sure how many comic or pop culture fans also read this blog, but this is major news.

For the first time in it's 50+ year history, the most famous pop culture convention in the world won't be happening.

There are already rumors that Disney & Marvel may stream a panel available to fans that would have typically been one of the main events at the con.

This got me thinking about The National Sports Card Convention.  I have never been to The National and was hoping to go this year since it is happening in my home state.  Yay! New Jersey!

As I was busy updating my checklist I came across a few cards that were NSCC exclusives and thought I should finally show them off. 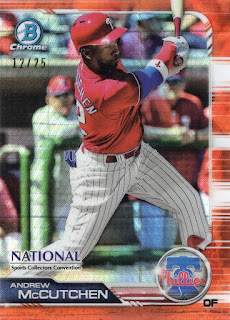 This "Christmas numbered parallel" is the orange prism refractor found only in the special NSCC packs.

The logo for the convention is seen to the left corner, just above the name of Andrew McCutchen. 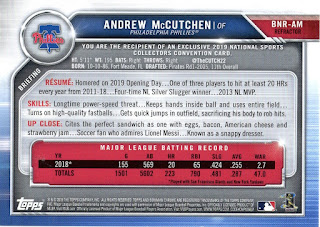 In order to receive a pack of these, attendants would need to buy a box of Topps products from a partnered dealer and bring the box along with a special sticker to the Topps booth where they would be rewarded with a pack of these exclusive Bowman Chrome cards.  The set contains 50 cards and offers color parallels and autographs randomly inserted into the 4 card packs.  I will show off some other 2019 Bowman Chrome National Exclusives in another post, sometime in the future. 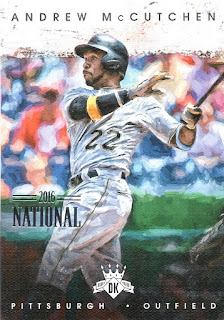 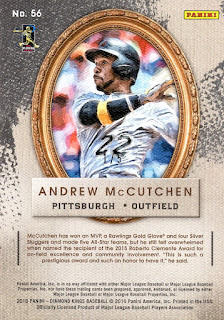 The Back is stamped directly in the center of the card and is numbered to only 5 copies.

I also have an Industry Summit card buyback. 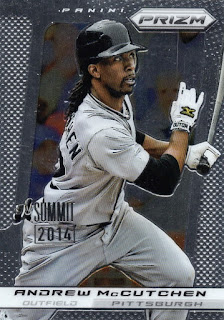 Dealers, card companies, and others directly involved with the hobby who attended the 4 day event in Las Vegas received a bunch of swag from card companies.

This "Buyback" is actually a 2013 Prizm base card with The Summit 2014 stamp to the left ofthe card, just under Cutch's jersey number. 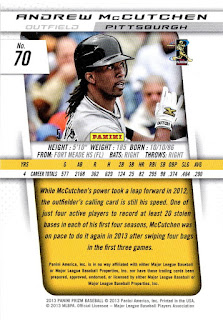 The card is numbered on the back to the left of the Panini centered logo.  It is numbered to only 5 copies.
Posted by Collecting Cutch at 6:37 AM