Each year Topps has done a different method of promoting their flagship cards.

This year the theme has been about the decades.  With it being a new decade, Topps is focusing on previous decade best players and teams.  Last year Topps focused on 150 years of baseball.

There have been "chasing" and "golden" events that Topps has promoted, but my favorite gimmick was in 2011.

2011 is kind of an iconic set now thanks to the great rookie class available in 2011 Update (Trout, Altuve, Goldschmidt, JD Martinez).

The theme that Topps used in 2011 was their Diamond Anniversary, 60 years of collecting.

Within the packs of flagship you could get a Diamond Card Giveaway code that was inserted 1 in every 4 packs.  Once unlocked you could "dig for diamonds" and unlock cards from 1952-2009, die cut diamond cards (not numbered), die cut Black diamond cards (numbered to 60 copies), or the ultra rare 1/1 diamond embedded base card.  (I will show mine off again in a few days so if you haven't seen it already, I will revisit that awesome card).

More details about the diamond card giveaway can be found here.

I was fortunate that I grabbed one of these black diamond cards a long time ago.  They all have a protective layer on top of the card (that's the wrinkles you see on the card below) that can be peeled off to really make the card refract light better. 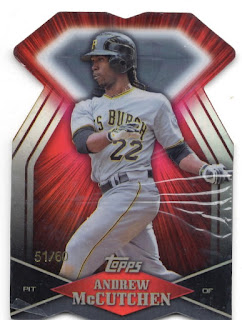 The black diamonds are the rarest among the diamond die cuts and can often cost $30-$100 depending on the player.  Of course a Derek Jeter is listed on eBay at this moment for over $400 at this current time. 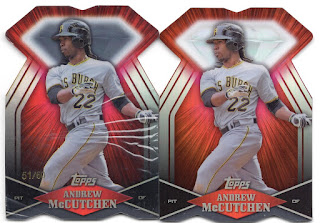 There is also a base diamond card available (pictured above next to the black diamond). 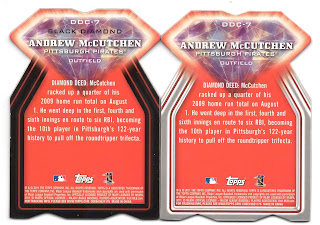 The backs are colored appropriately on the border to match the diamond on the front.

Do you remember digging for diamonds in 2011 Topps?
Posted by Collecting Cutch at 7:12 PM