I have always thought that the atomic refractors from Topps Chrome products look the best.  Superfractors are awesome too, but the Atomic Refractor has a look to it like "shit is about to get real". 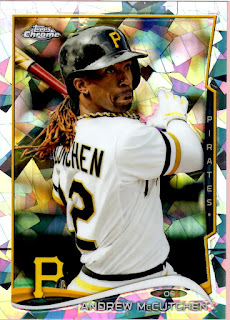 The low numbered atomic refractors from Cutch's early MVP caliber seasons have evaded me for a long time.

Well, one finally popped up for sale for his 2014 Chrome and I had to have it.

It's numbered to only 10 copies and like I said, these don't show up very often.  Another Cutch collector has already reached out to me trying to get it.  I'm torn if I want to trade it though. 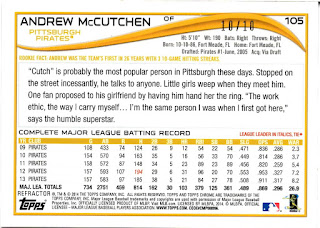 The card number is 105 and if you look at the Periodic Table of Contents for this atomic level of cardboard you will see that 105 is the highly unstable radioactive synthetic element, Dubnium.

Cutch was radioactive in 2014 when he followed up his MVP season with another top 3 finish for the NL MVP
Posted by Collecting Cutch at 9:15 AM