Light Up The Bat Signal!

When the Pirates were trading for AJ Burnett just before spring training 2012, my optimism for the team was at an absolute high.  The team managed to be very competitive through the first half of the 2011 season.  Their use of shifts and elite bullpen was good enough that the Pirates offense could still hang in for games.  Add to the fact that they had a pipeline of front of rotation guys on the way in the form of Gerrit Cole, Jameson Taillon,  and Luis Heredia made it seem like the Pirates were going to finally start winning regularly again.

AJ Burnett instantly became my favorite pitcher of the staff.

Prizm released an insert called Band of Brothers and it featured both Andrew McCutchen and AJ Burnett.   For the past few years I have been trying to track down all the parallels.

One of the biggest non 1/1 needs from my entire collection can officially be crossed off. 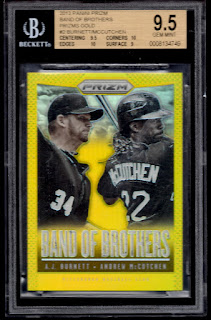 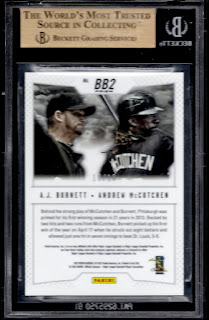 AJ Burnett became known as Batman around Pittsburgh and during his final home game with the Pirates he was given a painting.

In his return to the Burgh after a stint on DL in 2015, the city lit up the bat signal behind him. 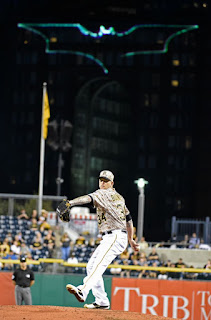 His final home game had Batman flags and posters and t-shirts all throughout the stadium. 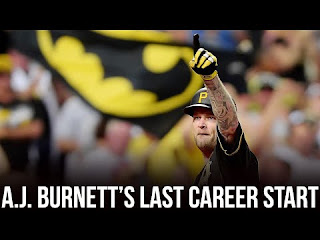 Posted by Collecting Cutch at 9:47 PM