Growing up in the 80s and 90s there was a lot of awesome action figures and cartoons produced.  Some of my favorites were Thundercats, Voltron, Transformers, Teenage Mutant Ninja Turtles, Tale Spin, Silverhawks, and soooooo many more.  Many of these shows were classics that I would watch every Saturday morning and after school.

I distinctly remember watching the Ninja Turtles on Christmas Eve 1991 (this is backed up by old family video cassettes) and it was an episode featuring Casey Jones being brainwashed.

One of my favorite characters from the original TMNT series is Casey Jones.

In a random search for sketch cards I came across an eBay commission card for the Shell Shocked Studio.  I messaged him and asked to do a combination of two of my favorites. 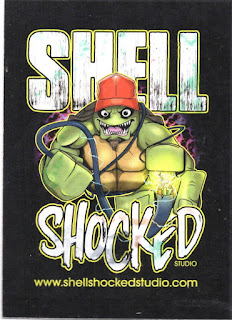 This was the result. 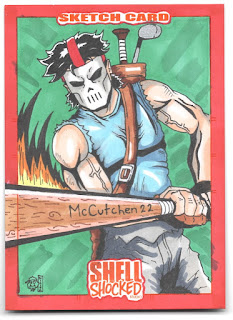 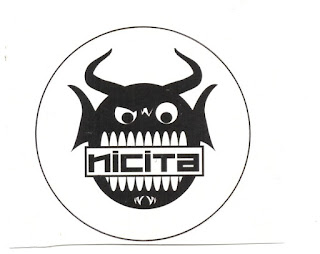 Here are some scenes from the original cartoon featuring the sports crazed vigilante, Casey Jones.


And here is a scene from the original movie when Casey Jones meets Raphael.  Kudos to the Jose Canseco reference.


This week was the big reveal of Toy Fair 2020 where Neca Toys announced an action figure of Casey Jones based on the 1990 TMNT live action movie.  I haven't bought any display figures for a long time, but will definitely be picking that up.
Posted by Collecting Cutch at 7:45 AM