You may recall that I had a chance to meet Andrew McCutchen last September.  I showed off the custom dreadlock card that Tanner Jones made for me.  Brad from Brad's (Phillies) Blog met up with me at the show and filmed the entire meeting which I pinned to my Twitter.  The whole interaction can be revisited here on my blog.

Well as weird as it is to have a piece of cardboard with a piece of dreadlock in it, I wasn't done.  I asked Tanner to make another custom for me so that I could send it off to another McCutchen collector who has sold me A LOT of low number Cutch cards over the years.  In addition to that custom I asked Tanner if he could create a t206 style dna relic card.

As a Pirates fan there is no more desirable card than a t206 Honus Wagner card.  It is a holy grail of anyone who collects sports cards.  It makes it more special for a Pirates fan though.  I will never own an original, but did have a chance to hold one at a Chantilly show a few years ago which I wrote about on my old blog here.

Back in 2002 Topps released a bat relic card inside a framed Honus Wagner mini that resembled the legendary t206 card.  It is one of my favorite cards in my collection.  I showed it way back in 2013 on the old Pirates Treasure Room blog.

I asked Tanner to recreate something similar using a strand of the dreadlock I gave him for the custom and he created an awesome Cutch card in that t206 style sporting a Homestead Grays uniform. 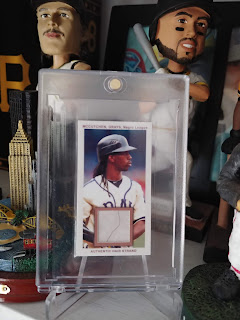 Here is what he came up with.  This card is fricking awesome!!! 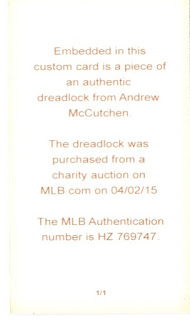 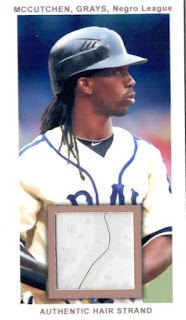 Cutch is one of the premier black baseball players in the game today.  It may not be a coincidence that his prime years were with the Pirates, a team housed in Pittsburgh.

For the better part of a decade, the Homestead Grays of Pittsburgh, dominated the Negro Leagues.  I have talked before about Hall of Famers and Negro League legends like Josh Gibson, Satchel Paige, and Cool Papa Bell.

A pitcher who played the twilight of his career with the Grays may have actually been the best pitcher in Negro League history though.  And in case you're wondering, his name isn't Satchel Paige. 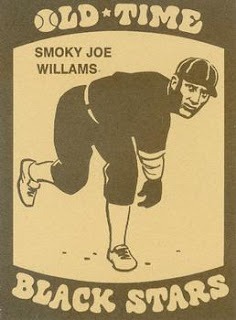 " Smoky" Joe Williams was born in 1886 to an African American and Comoche Indian parents.  He began his baseball playing career in 1907 with the San Antonio Black Bronchos.

Not much is known of his stats, but it has been said that he struck out 27 batters in a 12 inning game and that he threw a no hitter against the New York Giants in an exhibition match.  His barnstorming exhibition games had him defeating many Hall of Famers like Waite Hoyt andGrover Alexander.

In his only matchup versus Paige, Williams bested him 1-0 as a 43 year old while Paige was just breaking into his prime. 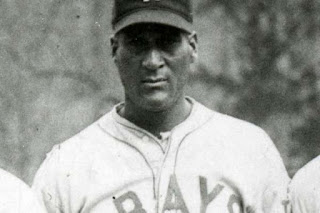 Williams was finally elected to the Baseball Hall of Fame in 1999. 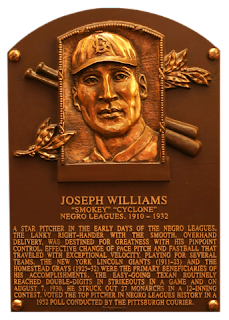 Posted by Collecting Cutch at 9:14 AM