Each Thursday this month I will be spotlighting a former Negro League player. 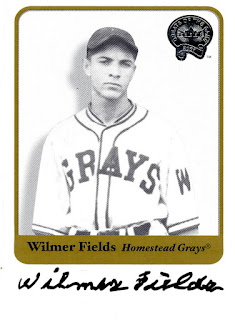 Today I am showing off Wilmer Fields, pitcher for the Homestead Grays. 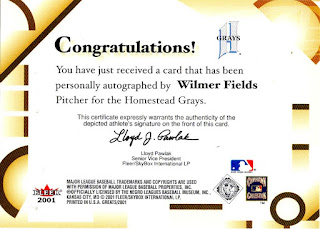 Fields received an on card autograph in 2001 Fleer's Greats of the Game set.  Copies of the card can still be grabbed for under $20.

Fields joined the Homestead Grays in 1940 at the age of 17 and would go on to pitch to a 30-9 record in his first three seasons.

He left his baseball career in his prime to serve in the Army and in the 5 seasons following his discharge he would pitch to a 72-17 record.  He helped the Grays clinch four league titles (1940, 1941, 1942, 1948) and won the Championship in 1948.  Had it not been for Fields absence on the Grays while he was in the Army, the Grays likely would have won more Championships.  The 1948 Championship would be the last Negro World Series games played.

As the Negro League was winding down, Fields went to play baseball in Canada where he won 3 MVP awards for his two-way style of play.  When he wasn't on the mound with a devastating fastball, slider, and even a knuckle ball he would play 3rd base or in the outfield.  During his 4 seasons in Canada he posted a record of 38-7 and had batting averages of .392 over 4 seasons in 1951-1955.   He won 3 MVPs in those 4 seasons.

After his venture In Canada he moved to several different Latin Leagues playing in Cuba, Mexico, Panama, and Venezuela.

Fields left baseball in 1958 and eventually became a bricklayer's helper.  After that brief work he became an alcohol counselor with the District Government.  He helped reform schools and prisons and would organize games between inmates at the prison and schools.

Upon retirement in the 1980s he helped raise money for former Negro League players by setting up autograph shows and benefit auctions.

The Pittsburgh Pirates continue to wear the Negro League uniforms on an annual basis.  Topps has used thr uniform for several of their throwback sets including the 2018 Salute Series which featured cards of Andrew McCutchen, Josh Harrison, and Josh Bell all wearing the Grays uniform. 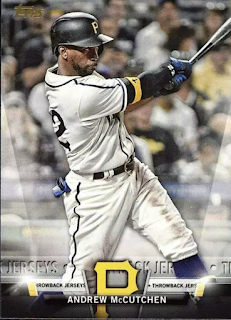 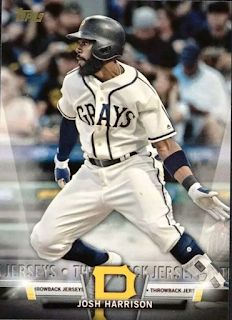 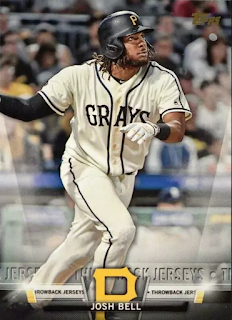 Andrew McCutchen wore the Homestead Grays uniform many times while a member of the Pirates begining in 2009 which you can see below standing next to Nyjer Morgan. 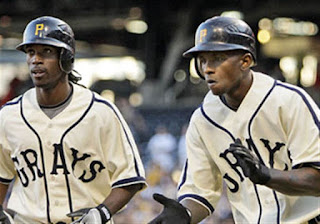 Posted by Collecting Cutch at 8:49 AM