The Firsts of Firsts

There was a lot of requests made for some famous black history that was made in relativity to them being the firsts to do it.  I am going to do a combination post on some of them and relate it to this card you see below. 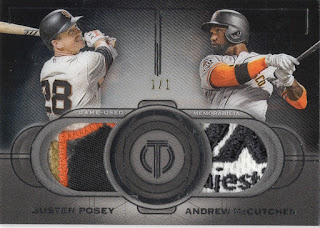 The above 2019 Topps Tribute black parallel is a dual patch relic card of Buster Posey and Andrew McCutchen.  The pair were teammates for the 2018 season.

This black parallel is numbered 1/1. 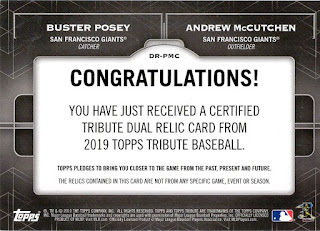 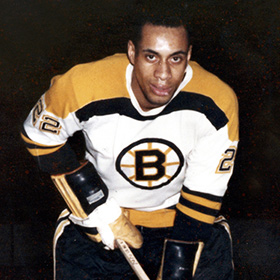 Willie O'Ree was the first black player in the NHL.  The 5ft9inch winger broke the hockey color barrier in 1957.  He stated that Jackie Robinson was an inspiration to him and that he met Jackie when he was younger.  In November 2018, O'Ree was inducted into the Hockey Hall of Fame.

He played only a few seasons with the Boston Bruins, but like Robinson helped pioneer black athletes in hockey. 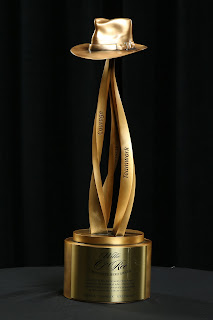 Similar to the Roberto Clemente award in baseball, in 2018 the Willie O'Ree Community Hero Award was created to spotlight an individual who has made the culture and community better through their outreach and hockey.
Darcy Haugan and Rico Phillips have won the 2018 and 2019 awards respectively. 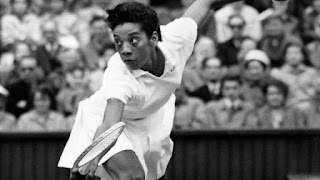 Althea Gibson was born in South Carolina in 1927 and faced much adversity in her path to become one of the first black athletes to cross the color barrier of international tennis. She grew up on a cotton farm and during the aftermath of the Great Depression. 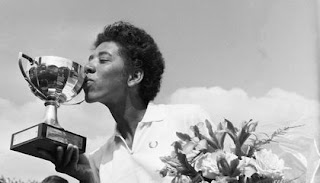 In 1956 she became the first African American to win a Grand Slam (French Championships).  The next year she won Wilbeldon and (what eventually became known as) the US Open.  She won them both again the following year.  In 1957 and 1958 she was voted Female Athlete of The Year by the Associated Press.

Venus and Serena Williams have stated In numerous interviews over the years that they are honored to follow in Gibson's footsteps. 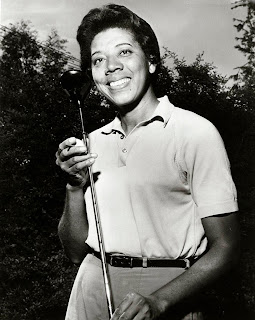 In the early 1960s she also became the first black player to compete in Women's Professional Golf Tour.  More information about Althea's golf career can be found here.

🏃🏈 🎾I will spotlight other black athletes who helped break the color barriers as the month goes on. 👣 🏃🏈
Posted by Collecting Cutch at 4:09 PM