We are stronger together than we are alone...

As stated for my Black History month event I will highlight an impactful black athlete in professional football each Sunday for February.

Today I have chosen a man who has an award named after him not only for contributions made on the football field, but for what is achieved in the community also. 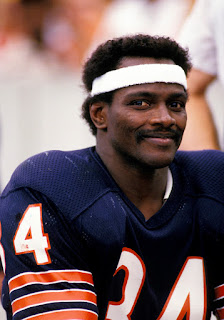 Today we will talk about Walter Payton

Payton played his entire 13 year NFL career with the Chicago Bears.  He was a member of the Super Bowl XX (20) Championship team.

He lead the league in rushing a few times and was a top 10 rusher every year making 9 Pro Bowl Selections.

In 1999, the NFL Man of the Year Award was changed to the Walter Payton Man of Year Award. 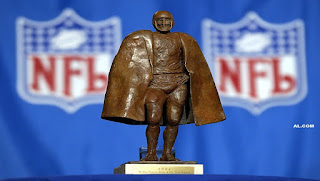 Payton was diagnosed with a rare disease and in his final months leading to his death he began to publicly push for organ donations and made a few commercials avout the subject despite his cancer being too far for a transplant to actually take place.

In the final months leading to his death he published an autobiography called Never Die Easy. 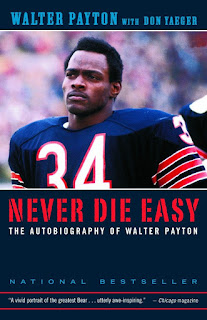 His charity continues to work for Payton's vision by raising awareness of organ transplants and donations.  In addition to that his foundation works to provide toys to underprivileged children in the Chicago area. 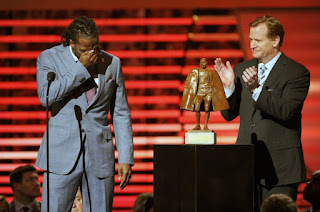 Many who receive the Walter Payton Award claim it is the greatest achievement a player can get.  (Arizona Cardinals Wide Receiver can be seen crying for receiving the Award in 2016)

Odd fact: When Cutch first started playimg for the Pirates he would be often miscast as Larry Fitzgerald who was a standout at University of Pittsburgh.  The two have become friends over the years. 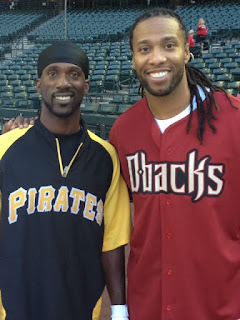 Cutch received the Baseball Equivalent to it in 2015 when he got the Roberto Clemente Award. 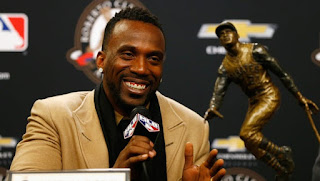 The Andrew McCutchen black card I chose to showcase today is a 2014 Bowman Black Parallel. 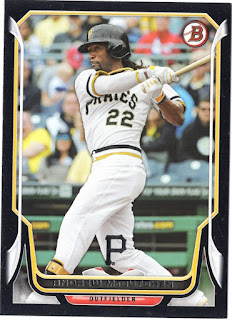 The design of the card looks great, but the back is the reason I chose this card to discuss a football player today. 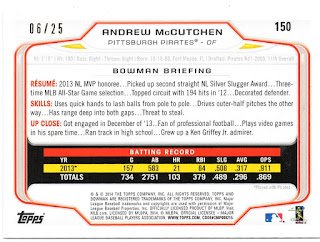 In the up close section you will see that Cutch is a fan of professional football.

Posted by Collecting Cutch at 8:30 AM